(CNN) -- The European Union has launched a fact-finding mission to determine the causes of the August war between Georgia and Russia, an EU spokeswoman said Tuesday. 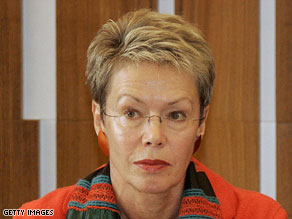 Heidi Tagliavini, a Swiss dipomat, will head the investigation into what started the Georgian conflict.

The eight-month inquiry will examine the facts of the conflict in regard to international law, humanitarian issues and human rights, said the spokeswoman, who did not give her name because she was not allowed to speak publicly. Investigators will also assess the basis for all accusations made regarding the conflict, the spokeswoman said.

Heidi Tagliavini, a Swiss diplomat and former United Nations special representative for Georgia, will head the mission, the spokeswoman said.

The mission began its work Monday and was due to finish July 31, 2009, ending with a report to the EU, the U.N. and the Organization for Security and Cooperation in Europe, the spokeswoman said.

Georgia launched a campaign against South Ossetia, a Russian-backed separatist territory, on August 7. The following day, Russian tanks, troops and armored vehicles poured into South Ossetia and another breakaway Georgian territory, Abkhazia, advancing into Georgian cities outside the rebel regions.