(CNN) -- The United States and Russia were absent Wednesday as representatives from countries from around the world gathered to sign a treaty banning the use of cluster bombs. 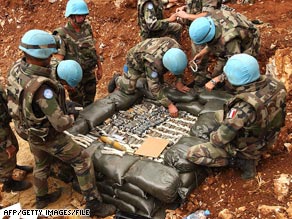 Some 111 countries were due to adopt the Convention on Cluster Munitions at an all-day signing ceremony in Oslo, Norway.

But four of the biggest cluster bomb makers -- Russia, China, Israel and the United States, which claims the devices are a vital part of its defense strategy, stayed away.

Cluster Munition Coalition activists behind the agreement expressed disappointment at the absence of the big four, but insisted it wouldn't undermine the treaty as it passes into international law.

"Obviously it's very disappointing that those countries aren't here, but at the same time, the strong message that this treaty sends will make it very clear to those countries that these are unacceptable weapons and inappropriate in future conflicts," CMC Co-Chair Richard Moyes told CNN from Oslo.

"The treaty and the stigma that it builds will make it practically and politically much more difficult for them to use these weapons again in the future," Moyes added about the absent countries.

"Many of their partners will no longer be allowed to use these weapons, and clearly recognize these weapons as far too costly in humanitarian terms."

Cluster munitions, which break apart in flight to scatter hundreds of smaller bomblets, are described by the International Committee of the Red Cross as a "persistent humanitarian problem."

Most of a device's bomblets are meant to explode on impact, but many do not. Credible estimates show the weapons fail between 10 and 40 percent of the time, leaving civilians at risk of harm from unexploded ordnance, the ICRC says.

In addition to calling for a total, immediate ban of the weapons, the Oslo accord calls for strong standards to protect those injured. It urges that contaminated areas be cleaned up quickly and weapons immediately destroyed, the CMC said.

The agreement requires the destruction of stockpiles of the weapons within eight years, said Thomas Nash, coordinator of the Cluster Munition Coalition.

Earlier this year, a U.S. State Department representative called it "an absolute moral obligation" to rid a battlefield of unexploded ordnance after battle, but the insists cluster munitions are an important part of its defense strategy that can be regulated post-conflict.

During the 34-day war in Lebanon in 2006, the United Nations estimated that Israel dropped 4 million bomblets, 1 million of which may not have exploded, according to the ICRC. More than 250 civilians and bomb-disposal operators have been killed or injured by them in southern Lebanon since the war ended.

Cluster bombs were also used in the 1999 war in Kosovo.

In more than 20 countries, according to the ICRC, cluster bombs have created lasting "no-go" areas, rendering them as dangerous as minefields.

Laos is the most affected country. Millions of bomblets dropped during the Vietnam War continue to kill civilians more than three decades later.