LONDON, England (CNN) -- The British police practice of keeping DNA records of anyone they arrest is a human rights violation, The European Court of Human Rights ruled unanimously Thursday. 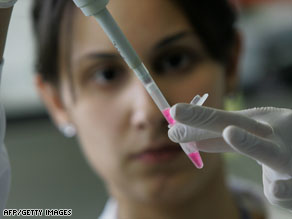 The European Court of Human Rights says the UK should not be keeping DNA records of everyone they arrest.

Two Britons took the case to the court after the police retained their fingerprints and DNA when criminal cases against them ended without conviction. Both then requested that the samples be destroyed, but their request was denied on the basis of a British law authorizing them to be retained indefinitely.

The court was "struck by the blanket and indiscriminate nature of the power of retention in England and Wales," it said in a statement announcing the ruling.

It ruled the British practice was a violation of the "right to respect for private and family life" under Article 8 of the European Convention of Human Rights.

The two applicants are both from the northern English city of Sheffield. One, Michael Marper, was arrested in March 2001 and charged with harassment of his partner. The case was formally discontinued three months later when he and his partner reconciled.

The second applicant, a minor identified in court papers only as S., was arrested in January 2001, aged 11, for attempted robbery. He was acquitted in June 2001, on the same day the case against Marper was dropped.

Marper told CNN he was surprised the case went as far as it did.

"It's a shame it had to go all the way to the European Court. It was only a trivial thing in the beginning," he said.

He was in favor of the police DNA database when it was introduced.

"I wasn't against the principle of it. I'm all for DNA investigation at a crime scene."

He added that he did not object to retaining the DNA of convicted criminals "so if you committed a crime later it could be traced and checked out."

But, he said, if a case "has not been to court, then the DNA evidence should be thrown out with it."

The court ruling cannot be appealed, and theoretically requires the British government to change its policies.

But British Home Secretary Jacqui Smith, who is responsible for the police, said she was "disappointed" by the ruling and that the existing law would "remain in place while we carefully consider the judgment."

"DNA and fingerprinting is vital to the fight against crime, providing the police with more than 3,500 matches a month," she said in a statement released by the Home Office Thursday. "The government mounted a robust defense before the court, and I strongly believe DNA and fingerprints play an invaluable role in fighting crime and bringing people to justice."