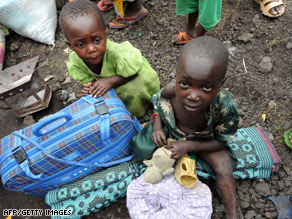 Populations within conflict zones such as the Democratic Republic of Congo are particularly vulnerable.

The Food and Agriculture Organization has issued preliminary estimates classifying 963 million people as undernourished -- an increase of 40 million people over the past year.

"One out of seven people -- about 15 percent -- suffer chronically of not having enough to eat," said Mark Smulders, an FAO economist.

The hunger report -- titled "The State of Food Insecurity in the World 2008" -- said the world's financial and economic problems could throw more people into poverty.

The number of hungry had been increasing over the years before the rise in food prices, with warfare and political instability continuing to be among the factors causing poverty.

The preliminary estimates lack a firm country breakdown, but last year's figures are an accurate measure of where the problems are.

About 907 out of 923 million undernourished people in 2007, or 65 percent of the hungry, live in India, China, the war-wracked Democratic Republic of Congo, Bangladesh, Indonesia, Pakistan and Ethiopia.

There has been progress in fighting hunger in the Asian nations of Thailand and Vietnam, and in the sub-Saharan African nations of Ghana, Republic of Congo, Nigeria, Mozambique and Malawi, the report said.

Food prices have declined from their peak earlier in the year, but they are staying high compared to other years, the agency said. The Food and Agriculture Organization's food price index was 28 percent higher in October than it was two years before.

"Prices of major cereals have fallen by over 50 percent from their peaks earlier in 2008 but they remain high compared to previous years," the FAO said.

The agency said the "rural and urban poor, landless farmers and female-headed households are the worst hit by high food prices."

All About United Nations