(CNN) -- An actor escaped death in front of an Austrian theater audience after slashing his throat in a bizarre on-stage mix-up. 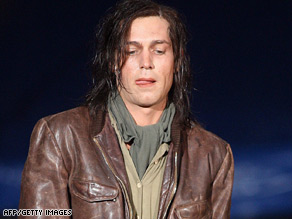 File image of Daniel Hoevels on stage in Salzburg

Daniel Hoevels, 30, collapsed on stage at Vienna's Burgtheater last weekend with blood pouring from his neck after cutting his throat with what was supposed to be a blunt knife, media reports said Thursday.

As he fell injured the audience started to applaud, oblivious to the fact that Hoevels was really hurt, Britain's Telegraph newspaper reported.

The actor was rushed to hospital with a knife wound that had narrowly missed his main artery.

Fortunately Hoevels recovered after treatment and appeared on stage the following night with a bandage around his neck, Austrian media reports said.

Ironically, Hoevels' character was supposed to commit suicide in the stage production of Friedrich Schiller's Mary Stuart, about Mary Queen of Scots.

Austrian police are now investigating whether the incident was a mistake or a deliberate attack on the actor.