LONDON, England (CNN) -- What recession? Christie's, the famed auction house, this week sold a nearly 36-carat diamond for $24.3 million, which it said was the highest price for a diamond sold at auction. 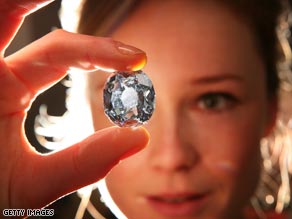 "In the midst of these challenging times, we were thrilled to achieve an historic price for an historic diamond," said Francois Curiel, chairman of Christie's Europe and auctioneer for Wednesday's sale.

The 35.56-carat Wittelsbach blue diamond, dating to the 17th century, was purchased by international jeweler Laurence Graff, the auction house said in a release. Graff was bidding against Aleks Paul of Essex Global Trading, a professional of Russian origin based in New York, Christie's said.

"Known as 'Der Blaue Wittelsbacher' since 1722, it is one of very few diamonds which can claim 17th century heritage, incredible rarity and exceptional beauty."

The diamond, mined in India nearly 400 years ago, has been privately owned since 1964. Until 1723, Christie's said, all diamonds worn by European royalty came from India.

The diamond has a royal lineage. Christie's traces it thus: King Philip IV of Spain (1605-1665) selected the diamond in 1664 as part of a dowry for his daughter, the Infanta Margarita Teresa (1651-1673). She had become engaged to Leopold I of Austria (1640-1705), who later became Holy Roman Emperor. When she died in 1673, her husband retained the diamond, which was passed on to his heirs.

The world's largest deep blue diamond is the "Hope Diamond," a 45.52-carat stone housed at the Smithsonian Institution in Washington, DC.

Diamonds apparently are recession-proof. Christie's reported jewelry sales of $226 million for the first half of 2008, calling it "the best jewelry season ever seen at auction." Sales for the first six months of this year marked a 32 percent increase over the same period in 2007, Christie's said.

According to Christie's, key diamonds the company sold in the first half of 2008 included a 13.39-carat fancy intense blue diamond that fetched $8.9 million in Geneva on May 14 and the pear-shaped potentially flawless 38-carat Onassis diamond, which sold for $7.1 million on June 11 in London.