ROME, Italy (CNN) -- The Italian capital Rome was spared major damage Saturday as some of the heaviest flooding in the past century reached its peak without bursting the banks of the Tiber river. 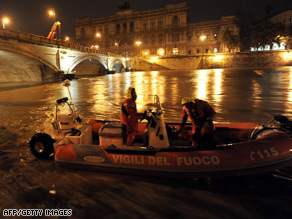 Italian Civil Protection officials said the river will take several days to return to normal levels but there was no longer a risk of flooding.

Civil Protection teams were also coordinating the removal of two barges that crashed against bridges after breaking their moorings on Friday.

Italian media report that last night a young man from Ireland fell in the Tiber, but his body has not been found yet.

Hundreds of volunteers and officials had been deployed around Rome ahead of the flood's peak, while sandbags were lined up to contain any possible river overflow.

Firefighters Thursday had to rescue dozens of motorists stranded in their cars. Because of the intense rain, the streets of some northern Rome neighborhoods were already flooded by water and covered in thick brown mud.

One woman died near Rome early Thursday when her car was submerged by a wave of water and mud in an underpass. The body of a second victim was found in the southern region of Calabria after a bridge collapsed.

Earlier this month, much of the Italian city of Venice was underwater as some of the heaviest floods for several decades burst the city's famed canal networks and inundated historic landmarks such as St. Mark's Square.

All About Tiber River • Rome