ATHENS, Greece (CNN) -- Greek students have called for daily protests starting Monday, 10 days after the police killing of a 15-year-old boy in Athens sparked demonstrations that have thrown the country into turmoil. 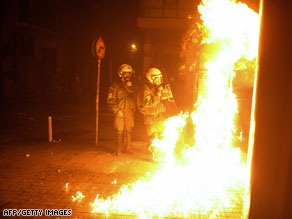 Riot police avoid being hit by a Molotov cocktail thrown by protesters in Athens.

Monday's sit-in is set to take place in front of the country's national police headquarters, with students urging similar demonstrations in front of police precincts across the country.

They have called for roads to be blocked on Tuesday, a demonstration Wednesday outside the courthouse where the police involved in the shooting will be testifying, and a nationwide protest on Thursday.

Authorities are bracing for potential violence following more than a week of riots which have become an outlet for simmering anger about the economy, education and jobs.