ATHENS, Greece (CNN) -- Dozens of protesters in the Greek capital stormed the headquarters of state television station ERT on Tuesday, interrupting broadcasting and unfurling a black banner that read, "Do not watch television. Everyone out on the streets." 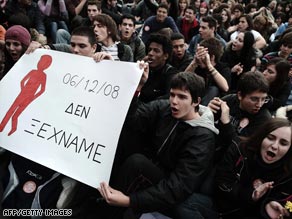 A youth holds a sign reading, "We won't forget," in front of police headquarters in Athens on Monday.

Witnesses, including ERT chairman Christos Panagopoulos, said 40 protesters snuck into the building outside the capital city of Athens, entering in small groups and acting as guests so they would not raise suspicions.

The move was a change in tactics by demonstrators protesting the police killing on December 6 of Alexis Grigoropolous, a 15-year-old boy in Athens.

Police have alleged that the teenager was about to throw a fuel-filled device at them, as a gang of youths pelted a patrol vehicle. Of the two officers involved in the shooting, one is charged with premeditated manslaughter and the other with acting as an accomplice.

The killing sparked daily protests, including riots, which have thrown the country into turmoil and have become an outlet for simmering anger about the conservative government's handling of the economy, education and jobs.

The unrest is threatening the government's hold on power, with some opposition groups calling for fresh elections. Stores and international businesses have been attacked, and at least 280 people have been detained by police. Of those, 176 were arrested -- 130 of them for looting.

At the state television station on Tuesday, some of the demonstrators went to the office of the president to complain about the network's coverage of the protests, while others wrested control of a broadcast from technicians in the master control room.

Another group of protesters entered the studio where an anchor was in the midst of an afternoon broadcast and unfurled the banner.

The station had stepped up security in anticipation of such a move, Panagopoulos said.

A posting on ERT's Web site said Panagopoulos "denounced" the actions of the protesters, saying they had not identified themselves.

"Mr. Panagopoulos stressed that they were not students but unknown people, who do not respect freedom and democracy," the posting said.

The peaceful stunt appeared to have been carried out by artists and other professionals, not just students, who have been conducting most of the demonstrations, a witness said.