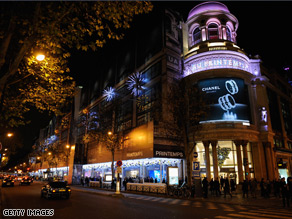 Paris's Printemps department store, which has been hit by a security alert, pictured last month.

CNN affiliate BFM-TV reported the dynamite was not rigged to explode, but police did not immediately confirm the report.

French news agency AFP said it received a letter in the mail Tuesday morning, claiming to be from an Afghan revolutionary group and saying that a bomb was at the renowned Printemps department store. The news agency alerted the police, who evacuated the store, AFP told CNN.

The letter specified three locations where explosives had been placed, and urged the news agency to contact the police "quickly or you will have blood on your hands," according to a copy of the letter obtained by CNN which AFP confirmed was accurate. "I assure you that this is not a prank," the letter said.

The bomb squad found the dynamite around 11 a.m. (5 a.m. ET), police said. It is not clear if the explosives were found where the letter said they would be.

See where Printemps is located in Paris »

AFP said the letter was signed by a group called "Front Revolutionaires Afghan," or Afghan Revolutionary Front. BFM-TV reported the group is calling for the withdrawal of French troops from Afghanistan by the end of February 2009.

"Make sure the message is relayed to your president of the republic that he withdraw his troops from our country (Afghanistan) before the end of February 2009 or we will strike again your capitalist department stores but without warning," the letter said.

It is the second time in a week that AFP has received a warning about the store. The agency said it received a phone call from a similar Afghan group a few days ago regarding the store, but at the time, police chose not to evacuate.

Printemps, one of France's most renowned stores, is popular with tourists and locals alike and located on the Boulevard Haussman. Most of the store reopened later in the day, although the area where the dynamite was found remained closed.

Jim Bittermann, CNN's senior European correspondent based in Paris, said: "These kind of stores at this time of year are absolutely packed with shoppers."

He added that France has a considerable number of troops in Afghanistan. In August, 10 French soldiers were killed in fighting near the Afghan capital Kabul.

French President Nicolas Sarkozy said earlier this year that his government was willing to commit more troops to the war in Afghanistan.

"We cannot afford to see the Taliban and al Qaeda returning to Kabul," Sarkozy said during a state visit to the UK in March. "Whatever the cost, however difficult the victory, we cannot afford it. We must win."

Paula Newton, CNN's international security correspondent, said that the group involved was previously unheard of. "This may be termed a hoax attack but it will cause real anxiety on the ground."

CNN's Jim Bittermann and Niki Cook contributed to this report