LONDON, England (CNN) -- The conviction of a terrorist doctor in the UK exposes how any section of society can become radicalized, a top police officer said Tuesday. 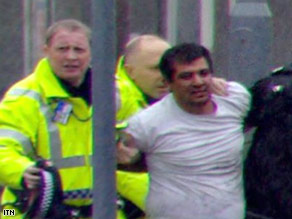 Bilal Abdulla is shown being arrested after the attack at Glasgow Airport.

Bilal Abdulla was well-educated and working as a doctor when he carried out his plot to plant car bombs in London -- rather than unemployed or with feelings of being outside or abandoned by society as has been seen before in the UK.

Born in southern England, his family moved to Iraq when he was a child. He grew up in the capital during Saddam Hussein's rule and went to the University of Baghdad before returning to Britain to attend Cambridge University.

The Cambridge-educated graduate became a doctor working in the National Health Service where the maxim is to treat anyone regardless of the ability to pay.

He told the UK's Press Association: "These individuals were not on our radar and that in itself is very interesting. When you look at the profile of these individuals they are very different from the terrorists we have dealt with in this country before - being professional people.

McDowell added they were probably inspired by al Qaeda in Iraq but developed their plan in Britain without help from abroad.

"I think this was a group that was largely self-motivated, came up with the ideas themselves, tutored themselves through the Internet. I don't think they received significant training elsewhere, which is unusual from what we have had in the past," he told PA.

Abdulla's motive, prosecutors said, was revenge for the bloodshed in Iraq. Prosecutor Jonathan Laidlaw said: 'There is no longer a conventional approach to terrorism. There are no rules to be broken any more, nothing can be taken for granted."

Abdulla was found guilty Tuesday of conspiracy to murder and conspiring to cause explosions. He will be sentenced to Woolwich Crown Court, London, on Wednesday.

The jury rejected his defense that he had planned only to set fire to cars in central London as a way of highlighting the plight of Iraqis.