LONDON, England (CNN) -- An Iraqi doctor has been convicted of conspiracy to murder in a car bomb attack at a busy Scottish airport in June 2007 and failed attacks in London a day earlier. 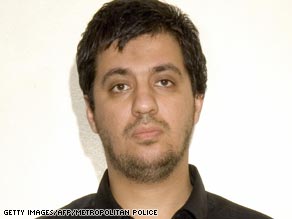 Bilal Abdulla could be jailed for life after his terrorism conviction.

The jury at Woolwich Crown Court in south London found Bilal Abdulla guilty of conspiracy to murder and conspiring to cause explosions, a court spokeswoman told CNN.

But the jury acquitted Jordanian doctor Mohammed Asha of the same offenses, said the spokeswoman, who declined to be named.

The two-month trial dealt with the discovery in June 2007 of two explosives-filled Mercedes cars in central London.

One of the cars was parked outside a packed nightclub near Piccadilly Circus and the other was parked just off Trafalgar Square.

Watch as doctor convicted over plot »

An ambulance crew notified police about the first car after they saw smoke coming from it. The second car was towed away for a parking offense but drew suspicion because it smelled of fuel.

Officials later said both cars cars were filled with fuel, gas canisters, and nails. Police managed to defuse them.

The following day, with attention still focused on the averted attacks in the capital, a Jeep SUV sped through barriers outside Glasgow International Airport and slammed head-on into the terminal. The Jeep, filled with propane gas, burst into flames and created a fireball.

The driver and passenger jumped out of the car. The driver, Kafeel Ahmed, set himself on fire and later died in the hospital; the passenger was identified as Abdulla, an Iraqi doctor who had been practicing medicine in Scotland.

Later that day, police arrested Asha as he was driving with his wife on a motorway in Cheshire, northwest England. Police said Asha, a doctor of Palestinian descent who grew up in Jordan, conspired with Abdulla to carry out the explosions, but the jury did not agree.

Abdulla wanted revenge for the Iraq war and what he believed to be Western oppression of Muslims around the world. But the seven female jurors and five men rejected his defense that he planned the attacks to highlight the plight of Iraqis.

A third man charged in the case, Sabeel Ahmed -- Kafeel Ahmed's brother -- pleaded guilty in April for failing to disclose information about an act of terrorism. He was deported to India earlier this year.

Abdulla, who faces a life sentence, is likely to be sentenced on Wednesday morning. Asha is expected to be released from Belmarsh prison later on Tuesday and deported to Jordan, according to the Press Association.