MADRID, Spain (CNN) -- Letters containing white powder were mailed to 16 U.S. embassies across Europe, according to the State Department on Wednesday. 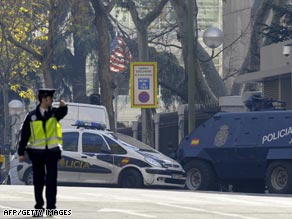 The substance has proved to be harmless in 15 locations with results still pending for the final embassy in The Hague, Netherlands, Deputy Spokesman Robert Wood said.

An envelope, containing what testing revealed to be white flour, prompted the U.S. Embassy in Madrid to close the staff entrance on Wednesday, a U.S. embassy official told CNN.

Mail at the U.S. Embassy in Madrid is received near the front entrance and was closed amid security concerns, he said, though most employees remained at work.

"We know where the package is coming from," the official said, but declined to elaborate. The official spoke on coindition on anonymity because he is not authorized to speak to the media.

He described the incident as "very serious" but went on to say there is probably "more commotion" outside the embassy, where local media reported police and ambulances had gathered.

A similar letter was mailed to the U.S. Embassy in Copenhagen on Tuesday, embassy spokeswoman Melissa Ford said Wednesday. She said the contents of that envelope "still aren't in," contrary to Wood's statement.