ATHENS, Greece (CNN) -- Thousands of youths demonstrated in central Athens Friday as anger flared in the Greek capital following the shooting of another teenager. 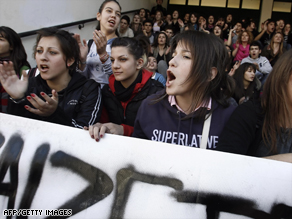 High school students protest in front of their school in the western Athens suburb of Peristeri.

A group of youths targeted the French Institute, a language and cultural institute, and police scrambled to the scene to contain the incident.

The situation began heating up during a protest rally Thursday that followed the bizarre shooting of a high school student in an Athens suburb earlier this week.

The 17-year-old was hit in the hand by an unknown assailant as he was talking to a group of schoolmates in the western suburb of Peristeri. Initial police reports showed the student -- the son of a leading trade unionist -- was hit with a .38-caliber handgun.

Police said no officers were patrolling the region at the time of the incident.

The mysterious shooting has enflamed widespread student anger over the fatal police shooting of a 15-year-old boy December 6, which sparked Greece's worst riots in decades.

Watch more about the flare-up of protests »

Students rallied Friday in response to the shooting of the 17-year-old. One of the rallies was planned for central Athens; the other in the suburb where the student was shot.

Later in the day, scores of artists are scheduled to gather in central Athens to stage a protest concert in response to the initial shooting of 15-year-old Alexandros Grigoropoulos.

Daily protests since the December 6 shooting, including riots, have thrown Greece into turmoil and have become a simmering anger about the conservative government's handling of the economy, education, and jobs.

A string of labor unions called on workers to march on Parliament Friday to protest the voting of the 2009 state budget, which calls for additional belt-tightening measures in response to the global financial crisis.

Student unions were also gathering to across the country to determine their course of action for the next few weeks.

At least 800 high schools and 200 universities remain shut as thousands of youths have seized the grounds and campuses in protest.

Of the two officers involved in the death of the 15-year-old, one is charged with premeditated manslaughter and the other with acting as an accomplice.