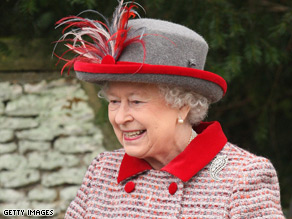 "Christmas is a time for celebration, but this year it is a more somber occasion for many. Some of those things which could once have been taken for granted suddenly seem less certain, and naturally give rise to feelings of insecurity," she told Britons in a televised appearance from Buckingham Palace.

"People are touched by events which have their roots far across the world -- whether it is the global economy or violence in a distant land, the effects can be keenly felt at home."

In her nine-minute message, she encouraged Britons to look for happiness and courage through helping others, and singled out World War I veterans and current troops in Iraq and Afghanistan as examples of courage and sacrifice.

Military veterans of the First World War recently commemorated the "service and enormous sacrifice of their own generation," the queen said.

The families of soldiers now serving overseas carry an extra burden of worry while they are away, she added.

"In such times as these, we can all learn some lessons from the past. We might begin to see things in a new perspective, and certainly we begin to ask ourselves where it is that we can find lasting happiness."

Watch excerpts of the queen's address »

It appears, she noted, that people who seem most contented and fulfilled are "the people who have lived the most outgoing and unselfish lives -- the kind of people who are generous with their talents or their time ... those who use their prosperity or good fortune for the benefit of others."

"When life seems hard, the courageous do not lie down and accept defeat. Instead, they are all the more determined to struggle for a better future," the queen said. "I think we have a huge amount to learn from individuals such as these."

She expressed pride in her son, Prince Charles, who turned 60 last month and is one of the longest-serving heirs to the throne. He was baptized in the music room where the queen spoke, she said.

Several clips -- including a few with the queen playing with Charles, as a toddler -- were shown throughout her comments.

Charles has helped and supported young people through various charities, and his sons, princes William and Harry, are following his lead, the queen said.

She closed her message with references to Jesus Christ, who she said lived an unselfish and sacrificial life, despite circumstances of great adversity.

"He makes it clear that genuine human happiness and satisfaction lie more in giving than receiving, more in serving than in being served.

"We can surely be grateful that 2,000 years after the birth of Jesus, so many of us are able to draw inspiration from his life and message."