(CNN) -- The final death toll from a Christmas Eve explosion in a five-story apartment building in southern Ukraine has increased to 27 people, including three children, Ukrainian officials said Friday. 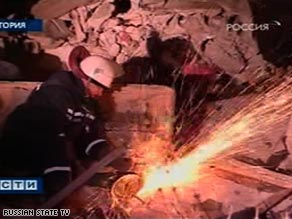 A rescue worker cuts through the rubble of the apartment building Thursday.

Twenty-one people were rescued from the remains of the building, located in the Black Sea resort town of Yevpatoria.

Rescue workers were still combing through the site Friday, but are expected to finish their work soon, according to Ukraine's Emergency Situations Ministry.

Government officials said oxygen canisters stored in the basement of the building are the most probable cause of the blasts, which reduced the apartment complex to rubble.

"As I was walking by, I heard a bang, and then I saw this building crumble," one eyewitness was quoted by Reuters.com as saying.

Another, who lived opposite the apartment block, told the news agency: "We heard a terrible bang. We though our balcony crashed because of the way the windows vibrated. But when I went onto the balcony I saw smoke from the other side."

Meanwhile, Ukrainian President Viktor Yushchenko and Prime Minister Yulia Tymoshenko set aside their feuding to visit the town together. According to Reuters.com, Yushchenko declared Friday a national day of mourning, while Tymoshenko promised families of the dead compensation and said they would be rehoused by the end of the year.

All About Ukraine • Viktor Yushchenko