MOSCOW, Russia (CNN) -- Russian President Dmitry Medvedev on Tuesday signed a law extending the presidential term, the Kremlin said, in a move many observers believe is designed to bring former president Vladimir Putin back to the nation's top office. 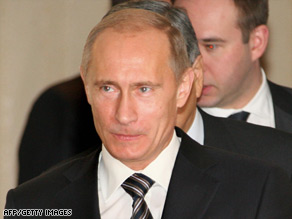 Medvedev, Putin's hand-picked successor, proposed the changes in November, starting with the next president.

Putin stepped down as president in May after two terms and is now prime minister.

Earlier this month, Putin shrugged off the suggestion that Medvedev would step down to make way for his return when the law passes.

"The next election is in 2012," he said December 4, according to the Interfax news agency. But his comments came after a three-hour televised question-and-answer session with the Russian public which reinforced some experts' view he remained the country's real leader.

Putin has done call-in programs each year since 2001, but this was his first one as prime minister, rather than president. Putin remaining in the chair this year, rather than yielding it to Medvedev, showed he still runs Russia, said analyst Yevgeny Volk, the director of the Moscow office of the Heritage Foundation, a conservative U.S.-based think tank.