LONDON, England (CNN) -- Britain feared that it would have been overwhelmed in the event of a Soviet attack because of the depleted state of its armed forces, according to secret files made public on Tuesday. 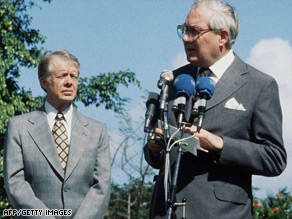 Papers released by the National Archives, under the 30-year rule, reveal that Royal Air Force fighter jets only had sufficient ammunition for two days of combat and the Royal Navy would fail to defend the country from Russian submarines.

The army would have been too over-stretched to cope with a widescale campaign of sabotage and subversion by Soviet special forces, the papers show.

Prime Minister James Callaghan called the situation a "scandal" when he discovered the scale of the problem and demanded resignations among the military.

"Heaven help us if there is a war!" he scrawled on one note. But ministers could do little until the Tornado fighter plane became available in the mid-1980s along with other military hardware.

The problem became clear when senior intelligence officers warned in late 1977 that, in the event of a conventional war, the Russians could unleash up to 200 bombers and 18 submarines against the UK.

The assessment of the Joint Chiefs of Staff was that British forces would be unable to cope.

"Air defenses would be outweighed because aircraft would be outnumbered and stocks of air defense munitions would sustain operations for only two or three days.

"Maritime forces need better anti-submarine weapons, and face a massive threat from submarine and air-launched missiles and also from mines; the most serious deficiency is in numbers.

"The army in the UK would, until mobilization is complete, have insufficient forces to meet its commitments; after mobilization of the reserves, a process taking between 15-20 days, the Army would be able to counter the currently assessed Soviet land threat during the initial stages of the war but, lacking supporting arms and logistic support, it would be inadequate to deal with any more significant threat, including sabotage or subversion on a wide scale."