WASHINGTON (CNN) -- President Bush has expressed his "deep concern" and regret to Iraq's prime minister over the desecration of a Quran by an American soldier, the White House said Tuesday. 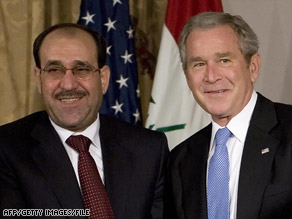 "President Bush expressed his deep concern over the incident and told Prime Minister Maliki that the soldier has been reprimanded by his commanders and removed from Iraq," Johndroe said.

Al-Maliki's office on Tuesday said Bush issued an apology for the action on behalf of the United States and "promised to present the soldier to the courts." The office said Bush made the apology in a call to al-Maliki on Tuesday morning.

An American staff sergeant -- a sniper section leader -- used a Quran for target practice in Iraq earlier this month.

The U.S. commander in Baghdad issued a formal apology Saturday and read a letter of apology by the shooter.

The sergeant has been relieved of duty as a section leader "with prejudice," officially reprimanded by his commanding general, dismissed from his regiment and redeployed -- reassigned to the United States, the U.S. military said.

Reports of the Quran desecration have enraged Muslims in Iraq and elsewhere around the world.

The soldier, whose name was not released, shot at a Quran on May 9, villagers said. The Quran used in the incident was discovered two days later, according to the military.

A tribal leader said "the criminal act by U.S. forces" took place at a shooting range at the Radhwaniya police station on Baghdad's western outskirts. After the shooters left, an Iraqi policeman found a target marked in the middle of the bullet-riddled Quran.

Pictures of the Quran show multiple bullet holes and an expletive scrawled on one of its pages.

Officials said the soldier asserted he wasn't aware the book was the Quran, but U.S. officials rejected the claim.

On Saturday, Maj. Gen. Jeffery Hammond, commander of U.S. forces in Baghdad, appeared with leaders from Radhwaniya and apologized.

"I come before you here seeking your forgiveness," Hammond said to tribal leaders and others at the ceremony. "In the most humble manner I look in your eyes today and I say please forgive me and my soldiers."

Hammond also read a letter from the shooter, who called his actions "shortsighted, very reckless and irresponsible," but he insisted he was not being malicious.

"I sincerely hope that my actions have not diminished the partnership that our two nations have developed together," the letter said.

Hammond said the soldier's actions were tantamount to "criminal behavior."

"I've come to this land to protect you, to support you -- not to harm you -- and the behavior of this soldier was nothing short of wrong and unacceptable," the general said.

Another military official kissed a Quran and presented it as "a humble gift" to the tribal leaders.

Many Iraqi leaders said the apology alone would not suffice.

On Monday, the Iraqi Islamic Party, the movement of Vice President Tariq al-Hashimi, condemned what it said was a "blatant assault on the sanctities of Muslims all over the world."

The party said it reacted to the news "with deep resentment and indignation" and wants the "severest of punishments" for the action.

"What truly concerns us is the repetition of these crimes that have happened in the past when mosques were destroyed and pages of the holy Quran were torn and used for disgraceful acts by U.S. soldiers," al-Hashimi said.

"I have asked that first this apology be officially documented; second a guarantee from the U.S. military to inflict the maximum possible punishment on this soldier so it would be a deterrent for the rest of the soldiers in the future."

CNN's Ed Henry and Mohammed Tawfeeq contributed to this report.