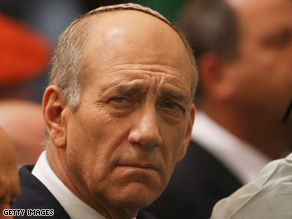 "I only know that he loved expensive cigars. I know he loved pens, watches. I found it strange," said Morris Talansky, 75, who gave Olmert $150,000 in loans and direct payments over 14 or 15 years.

Olmert is under investigation for allegedly receiving illegal funds and bribes before becoming prime minister. The Israeli leader says the money he received was for legitimate campaign purposes and has vowed to resign if indicted.

Officials wanted to question Talansky because they fear he may not return to Israel once he travels home to Long Island, New York. But Talansky has publicly said he would come back to answer questions and cooperate with investigators.

Talansky provided colorful testimony, describing how he would go to hotels and give cash-filled envelopes to Olmert.

He also told how he picked up Olmert's $4,700 hotel bill at the Ritz-Carlton in Washington. "He was the guest of my credit card," Talansky said.

Talansky said Olmert called him and said, " 'I can't use my card because it's maxed out' ... and he asked if he could borrow my card and he said it was part of a loan. It was a three-day stay." He said there were many food expenses on the bill.

In another instance, Olmert asked for a $15,000 loan, and Talansky said he would like to see the money returned as soon as possible.

At one point, Talansky cried when he learned the questioning might take longer than a day, saying he said he missed his wife, who is in the United States.

Police said Olmert received the funds in question from 1993 through 2006, during his tenure as Jerusalem's mayor and while holding ministerial positions under former Prime Minister Ariel Sharon.

Olmert also was involved in the Likud party primaries during that time, police said. He later left Likud for Sharon's Kadima Party and took over as prime minister after a stroke incapacitated Sharon.

"It is suspected that the prime minister received significant sums of money from a foreigner or number of foreign individuals over an extended period of time, partly directly and partly indirectly," Israel police and the Ministry of Justice said in a statement.

Calling Olmert "articulate" and "intelligent," Talansky said, "I had a very close relationship with him, but I wish to add at this time that the relationship of 15 years was purely of admiration. I never expected anything personally. I never had any personal benefits from this relationship whatsoever."

Talansky said Olmert told him he was going on vacation in Italy a few years ago and asked for a $25,000 loan.

"I figured we don't need any notes from him," Talansky said. "His word was gold. He was a friend, a very close friend. It was a loan."

He said Olmert's assistant, Shula Zaken, asked Talansky for cash when Olmert was going to Colorado for a speaking engagement.

There were no strings attached, he said.

This is the fifth investigation into Olmert since he became prime minister two years ago and "the latest in a longer string of probes to dog him during his three decades in politics," according to the Israeli newspaper, Haaretz. Olmert has never been convicted of wrongdoing.

Learn more about investigations of Olmert »

Zaken, a key Olmert aide for 30 years, was suspended last year as head of the prime minister's office amid allegations she appointed allies to Israel's Tax Authority. Olmert was not a suspect in that case but was questioned about Zaken's role.

Zaken has refused to cooperate in the current investigation into Olmert, and she has been placed under house arrest.

Olmert has had dismal approval ratings since Israel's 2006 war with Hezbollah militants in Lebanon, which some analysts say failed to weaken the group militarily or politically.