Iraqi prime minister: Iraq will not be used to 'damage' Iran

TEHRAN, Iran (CNN) -- Iraq's Prime Minister Nuri al-Maliki on Sunday tried to allay Iranian fears over a planned U.S.-Iraq security pact, saying his government would not allow Iraq to become a launching pad for an attack on its neighbor. 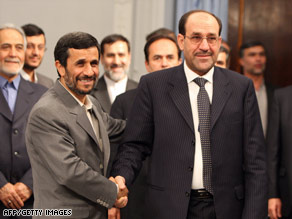 "Iraq today doesn't present any threat as it used to be in the times of the former regime," al-Maliki told Iranian President Mahmoud Ahmadinejad during a Sunday meeting between two leaders, according to a statement from the prime minister's office.

"Today's Iraq is a constitutional state based on the rule of law, and it seeks to develop its relations with the regional countries based on cooperation and mutual respect," al-Maliki said.

Earlier, Iran's state-run news agency IRNA quoted the Iraqi leader as saying that "Baghdad would not allow its soil to be used as a base to damage the security of the neighboring countries, including Iran."

His remarks come as the United States and Iraq are trying to reach a bilateral agreement on how long the U.S. military will remain in Iraq and what role it will play in Iraq's security.

But al-Maliki media adviser Ali Hadi said negotiations between Iraq and the United States are in their "very early stages" and were not part of Sunday's talks.

Watch Ahmadinejad and al-Maliki sit down for talks »

"The treaty is purely an Iraqi-American treaty. The Iranians have nothing to do with it," Hadi said. "We will not discuss the progress or the key elements of agreements or disagreements with them because this is an Iraqi issue."

The proposed U.S.-Iraqi pact has triggered street protests in Iraq, where many suspect the deal could lead to the establishment of permanent American bases, a long-term presence of U.S. troops and a weakening of Iraqi government control over those troops.

Shiite cleric Muqtada al-Sadr, whose militia was the target of a U.S.-backed Iraqi clampdown in Basra and Baghdad recently, has called for weekly protests against the agreement.

Al-Maliki and Ahmadinejad met Sunday afternoon, with Ahmadinejad calling on Iraq's neighbors and the United Nations to help restore security and stability to Iraq, IRNA reported. And al-Maliki thanked Ahmadinejad for his call for an end to longstanding U.N. sanctions against Iraq that date back to the 1991 Persian Gulf war.

Iran has long called for the withdrawal of U.S. troops from Iraq, which the United States invaded in 2003. Meanwhile, the United States has accused Iran of arming and training "criminal" Shiite militias in Iraq and of seeking to develop nuclear weapons, allegations the Iranians deny.

It is al-Maliki's third visit to Iran since he became prime minister more than two years ago. The two countries, which are neighbors, both have Shiite Muslim majorities, and al-Maliki's ruling coalition is dominated by Shiite religious parties long backed by Iran.

"I think this has to stop," Pachachi told CNN. "I hope that Mr. Maliki will make it absolutely clear that Iraqis of all parties, of all sectarian origins and ethnic origins, are strongly opposed to Iran's attempt to interfere in Iraq's affairs."

Pachachi, a former foreign minister, said al-Maliki's predecessor, Ibrahim al-Jaafari, allowed Iraq's security forces to be dominated by sectarian and ethnic militias, and that U.S. troops should remain until those influences are weeded out.

"In the long run, it is in the interest of the United States to have a secure Iraq and armed forces and security forces of Iraq with undivided loyalty and allegiance to the state and not influenced by sectarian affiliations or party loyalties," he said.