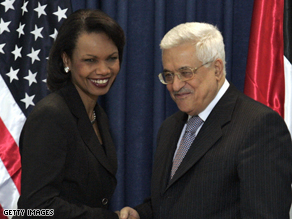 His remarks followed a meeting with Secretary of State Condoleezza Rice, who has dubbed the Israeli settlement plans "simply not helpful." Earlier Sunday, Rice said she would raise the issue during talks with Israeli Foreign Minister Tzipi Livni.

Rice met with Livni, then traveled to the West Bank city of Ramallah to meet with Abbas. The U.S. is presently trying to prod Israeli and Palestinian leaders to forge a peace agreement.

The Bush administration has repeatedly said it believes a peace deal can be achieved by year's end.

The Palestinian territories are divided, with Abbas' Fatah movement holding power in the West Bank and Hamas, which the U.S. and Israel consider a terrorist outfit, ruling Gaza.

Abbas emerged from his Sunday meeting with Rice saying that Palestinians remained committed to "international legitimacy," as well as to the U.S.-backed "roadmap," U.N. resolutions urging a peace agreement and the Arab-brokered peace initiative.

The U.S., U.N. and Arab frameworks form the foundation "for a two-state solution where the two states will be living side by side in peace and security," Abbas said.

However, he added, "We consider settlements to be the greatest obstacle to the road of peace."

"The more the construction, the more are the obstacles in our way to reach a peace agreement," Abbas said.

Rice said Sunday she would press Israel on its plans to build homes in East Jerusalem, which the Palestinians hope will one day become the capital of a Palestinian state.

Israel seized East Jerusalem from Jordan during the Six-Day War in 1967 and regards the land as part of its undivided capital.

As part of a 2003 roadmap peace agreement, Israel agreed not to build on disputed lands. Israel says it's not violating the agreement because most of the settlement would be on land it has already annexed.

Israel announced plans for the settlement Friday, bringing the total homes planned in the area to more than 3,000.

In a statement before her meeting with Livni in Jerusalem, Rice said, "I'm very concerned that at a time when we need to build confidence between the parties, the continued building and the settlement activity has the potential to harm the negotiations going forward."

Rice flew to Tel Aviv, Israel, on Saturday after attending a conference in Paris, France, dealing with aid to Afghanistan. During the trip, Rice said the U.S. was trying to bolster Palestinians' confidence in the peace negotiations.

"This is simply not helpful to building confidence," Rice said. "It will certainly be a topic of conversation, and I expect to raise it with all of Israel's officials and leaders."

Earlier this month, the White House and U.N. Secretary-General Ban Ki-moon criticized an Israeli plan to build an 800-home settlement in East Jerusalem. And in March, officials in Jerusalem announced another 600-home settlement as part of an initiative to add 40,000 homes to the city.

Rice said Israel's settlement plans in the area prove that the process of creating clear and universally recognized boundaries in the region is important.

"It gives us every reason that we really ought to be determining the boundaries of the state, because what's in Israel will be in Israel, at that point, and what's in Palestine will be in Palestine," she said.

"We've talked a great deal about road map obligations, and this one isn't being met."