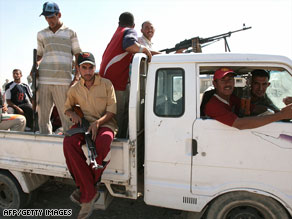 Former Iraq insurgents, pictured in 2007, in Anbar province have allied to oppose al Qaeda in Iraq.

The drive-by shooting occurred Thursday in the eastern part of the capital. No one has claimed responsibility. Investigators are looking into a motive for the attack.

The judge, Kamal al-Showaili, was driving home from work in the Jamila neighborhood. At least two of his bodyguards also were wounded.

The assassinations of professionals have been common in the Iraq war, with lawyers, judges and professors the victims of violence.

The U.S. military had planned a ceremony Saturday in Ramadi to transfer security responsibilities to the Iraqi military in the predominantly Sunni Arab province. A new date for the event is pending.

Anbar would be the 10th of 18 provinces and the first Sunni Arab province to get security control from U.S.-led coalition forces in the post-Saddam Hussein era.

Officials said 25 people were killed and another 20 were wounded Thursday when a suicide bomber attacked a meeting of tribal sheikhs in the Anbar town of Karma.

The U.S. military said the strike "bears the hallmarks" of an al Qaeda in Iraq operation.

All About Anbar Province • Iraq