WASHINGTON (CNN) -- Iran's response to the international community's offer of incentives in return for cutbacks in its nuclear program is not acceptable, two senior U.S. officials told CNN Tuesday. 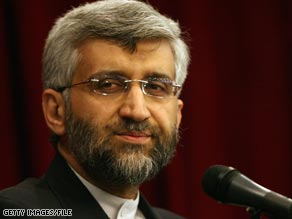 "It's another non-answer," a senior U.S. official said of a statement issued by Iran Tuesday in response to the offer. "It doesn't say anything. They are still pretending they are responding."

The council had offered to suspend sanctions against Tehran in exchange for a suspension of its uranium enrichment activity, which the international community fears could contribute to the production of a nuclear weapon.

"It doesn't seem to be what we are looking for," one senior U.S. official said, who spoke on the condition of anonymity because of the sensitive nature of the diplomacy involved.

The Security Council said Iran's statement on Tuesday came in after a weekend deadline that was originally set, but Iranian Foreign Minister Manouchehr Mottaki insisted last week that no such deadline existed.

The political directors of the "P5 plus one countries" will hold a conference call on Wednesday to discuss next steps.

The U.S. State Department said this week more sanctions against Iran would be considered in the absence of a positive response.