BAGHDAD, Iraq (CNN) -- Iraq and the United States are close to reaching a deal under which U.S. combat troops would leave by December 2010 and the rest would leave by the end of 2011, two Iraqi officials said Thursday. 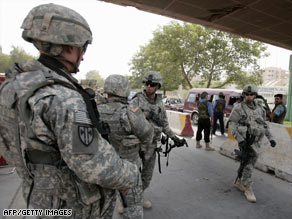 One of the officials, Deputy Foreign Minister Mohammed al-Haj Mahmoud, said the two governments probably will reach a final deal within days.

He and Haider Al-Ababdi, a Shiite parliament member from Prime Minister Nuri al-Maliki's Dawa Party, said that under the deal, U.S. troops would be restricted to their bases by June 30 instead of patrolling Iraq's streets.

Mahmoud, the head of Iraq's delegation negotiating a deal on how U.S. troops will operate there, also said the Iraqi government would be able to request that some troops stay longer.

Two senior U.S. officials said negotiators have made progress and are close to a deal. But they also said that some issues are unresolved and that troop withdrawals would be tied to conditions on the ground.

Watch what hurdles remain before a troop withdrawal »

The U.S. military presence is spelled out by a U.N. mandate, which is to expire by the end of this year. Iraq and the United States want to replace that mandate with a status-of-forces agreement governing how U.S. troops will operate in Iraq.

The U.S. officials said U.S. Secretary of State Condoleezza Rice spoke with al-Maliki on Wednesday to try to resolve the issue of legal immunity for U.S. contractors working in Iraq.

The officials described the phone call as tense.

Under a provision put into place in the early days of the U.S.-led occupation of Iraq, security contractors have had immunity from Iraqi law.

The Iraqi government has criticized the blanket immunity because of incidents such as the fatal shootings of 17 people in Baghdad's Nusoor Square on September 16. Iraqi officials say Blackwater Worldwide contractors killed the 17.

Also Thursday, a senior member of a Sunni political party that recently rejoined Iraq's government was fatally shot in the northern city of Mosul, the party said.

Gunmen assassinated Mahmoud Younis Fathi, a senior member of the Iraqi Islamic Party in Nineveh province and the director of religious schools for the Sunni Endowment, the party said. Fathi's bodyguard also was killed as the pair traveled to work.

Mosul police confirmed the slayings near Fathi's house in the western part of the city.

Sunni insurgents have targeted Sunnis who cooperate with the U.S.-backed Iraqi government. American and Iraqi troops have been fighting al Qaeda in Iraq in Mosul and surrounding Nineveh province in northern Iraq.

The Iraqi Islamic Party is the largest party in the Iraqi Accord Front bloc, which recently rejoined Prime Minister Nuri al-Maliki's government after bolting last year over disagreements with the leadership.

The Accord bloc -- which includes 44 lawmakers in the 275-member parliament -- pulled six ministers from the Cabinet last summer for several reasons, including what it called the monopolization of power by Shiites and Kurds and what it regarded as the unjust detention of Sunnis.

But Sunnis have been more friendly toward the al-Maliki government because of its efforts this year in promoting prisoner amnesty, sharing power and taking on militants in Shiite regions such as Basra, Amara and Baghdad's Sadr City neighborhood.

The leader of the Iraqi Islamic Party is Tariq al-Hashimi, one of Iraq's two vice presidents.

"The assassination of Mahmoud Younis Fathi is a cruel crime targeting the national voices and mission of taking care of youths in Mosul," the Iraqi Islamic Party said, adding that it "condemns and denounces" the killing.

In other violence Thursday in Mosul, insurgents killed three police and wounded six people by rigging a cart with explosives.

About 8 p.m. Thursday, a suicide bomber's car exploded after Iraqi police shot at it, an Interior Ministry official said. The explosion happened before the car reached a police station in al-Wahda neighborhood in southern Mosul, but eight policemen were wounded, the official said.

Gen. Hamed Namis al-Jabouri, police commander in Salaheddin, and seven other police officers were wounded when the bomb struck a convoy, police in Tikrit said. They were evacuated to a military hospital in Tikrit.

CNN's Mohammed Tawfeeq and Arwa Damon in Baghdad and Elise Labott in Washington contributed to this report.

All About Iraq • Al Qaeda in Iraq • Sadr City