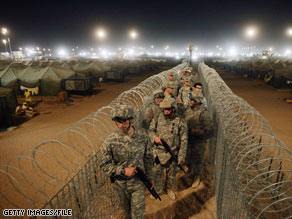 U.S. guards patrol at Camp Bucca in Iraq in May.

The division also investigated an incident in which eight prisoners were confined overnight to a housing cell that had been sprayed with a riot control agent, the Navy said.

The six guards will face courts-martial. Seven other cases have been resolved through nonjudicial punishment, according to a statement from the commander of U.S. Naval Forces-Central Command.

The courts-martial are expected to start within 30 days at Camp Bucca, which is in southern Iraq near the Kuwaiti border.

The guards accused in the case are assigned to Navy Provisional Detainee Battalion 4.