DUBAI, United Arab Emirates (CNN) -- A helicopter crashed into an oil drilling platform off the coast of Dubai, killing all seven people on board, officials said Thursday. 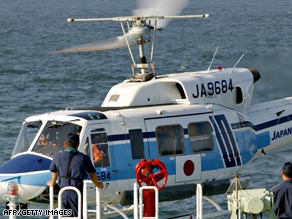 The helicopter which crashed was a Bell 212, the same model as pictured above.

Among the victims were an American and a Briton, said Hanan Moussa of the United Arab Emirates' General Civil Aviation Authority.

Also killed were two Indians, a Pakistani, a Filipino and a Venezuelan, Moussa said.

The Bell 212 helicopter crashed Wednesday on the deck of an oil rig, then broke up and fell into the sea, said a spokesman for AeroGulf Services -- which operated the chopper.

A fire broke out aboard the rig, located about 43 miles (70 km) off the coast of Dubai. The fire was quickly contained, the AeroGulf spokesman said.

Authorities have launched an investigation into the cause of the crash.