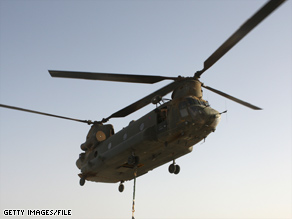 A U.S. Chinook helicopter, similar to this British Chinook, crashed in Iraq, the U.S. military said.

Officials have not determined the cause of the crash, but do not suspect hostile activity.

"Based on our initial reports, it is accurate to characterize this as an accident," said Maj. John Hall, a U.S. military spokesman.

The CH-47 Chinook was part of a four-aircraft convoy that was flying from Kuwait to Balad in northern Iraq. The chopper went down about 62 miles (100 km) west of Basra.

The other helicopters in the convoy did not sustain damage, Hall said.

The names of the soldiers were not released pending notification of next of kin.

The CH-47 Chinook is primarily used for transporting troops, supplies and artillery.

Baghdad was also struck by a series of roadside bombings that killed two and wounded 16, the official said.

The bombs detonated in two cars parked near each other outside a hospital in Harthiya district shortly before noon (0900 GMT), the official said. It was the second twin car bomb attack in Baghdad this week.

Five roadside bombs struck the Iraqi capital on Wednesday, one of which targeted the head of New Baghdad's district council, the official said. The council leader's driver was killed, while he and his security guard were wounded in the attack.

Another roadside bomb in eastern Baghdad killed an Iraqi policeman and wounded five other people.

Elsewhere on Wednesday, an assistant to the governor of Nineveh province was gunned down as he was leaving evening prayers in central Mosul, city police said.

Shamel Younis was walking outside the mosque when gunmen in a car shot and killed him, then fled the scene.

The new U.S. commander in Iraq said Tuesday that security in the country has improved, but is still in a "fragile state."

"As we've said many times, everyone is encouraged by the progress that has been made here in Iraq, but we still have a lot of work to do," said Gen. Ray Odierno, who took command of U.S. forces in Iraq on Tuesday.

"It's a proud moment for me to be given the responsibility to take command of Multi-National Force-Iraq and continue the mission here in Iraq as we move forward," Odierno said in Tuesday's handover ceremony in Baghdad, which was attended by Defense Secretary Robert Gates.

"We are in a fragile state now. What I want to do is build it to a more stable state. And I think we're in the process of doing it. It just takes some time, and it's slow," Odierno said.

Odierno said he is "encouraged" by the growth of Iraqi security forces and the national police.

"We're starting to see signs of some other of the governmental capacities begin to grow, which I think is extremely important," he said.

CNN's Jomana Karadsheh and Cal Perry contributed to this report.