(CNN) -- The Turkish military bombed PKK rebel targets Saturday in northern Iraq in response to clashes that left at least 15 Turkish troops dead, the PKK and the military said Sunday. 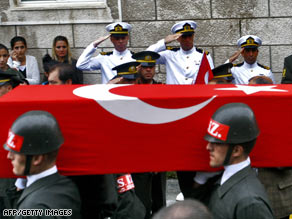 The PKK, or Kurdistan Workers' Party, said it sustained no casualties in the operation.

The Turkish military said the air operation was conducted on the PKK's "hiding positions" in the Avasin-Basyan area of northern Iraq near the border with Turkey.

During the operation, steps were taken to avoid civilian casualties, the Turkish military said.

Watch inside the PKK's hidden camps »

The military said the operation was carried out Saturday. The PKK's military wing said the military operation began after Friday's clash and lasted for two days.

At least 15 Turkish soldiers were killed and 20 wounded in the clashes, Turkish President Abdullah Gul said Saturday. Two others were missing, and the Turkish military said Sunday they were feared dead. The military said 23 PKK members were also killed in the attacks, launched from northern Iraq.

In its statement on Sunday, however, the PKK said more than 60 Turkish troops were killed and at least 30 injured. Nine PKK members were killed, the organization said.

On Tuesday, the Turkish government is scheduled to vote on whether to extend the authority of the Turkish military to launch attacks on PKK positions in northern Iraq.

Iraqi government spokesman Ali al-Dabbagh on Saturday condemned the clashes, calling them a "terrorist act" that "creates a serious threat to the security of the border areas and the joint security of Iraq and Turkey."

He called on the Turkish government to deal with this "criminal act wisely and with self restraint."

"The Iraqi government expresses its support for the measures the Turkish government will take within Turkish territory to guarantee its [Turkey's] security and stability," he said.

Saturday night, Iraq's Presidency Council, made up of President Jalal Talabani -- himself a Kurd -- and his two vice-presidents, condemned what it called "a vicious attack against Turkish troops."

"What makes the attack more horrific is the fact that it happened during the days of the Eid al-Fitr holiday, where Muslims should be celebrating, rejoicing and befriending each other ... instead of fighting and bloodshed," the council said. It pledged to "continue its joint efforts with the Turkish side to prevent the recurrence of such attacks and to put an end to the illegal presence of all foreign militants in Iraq."

The central Iraqi government has labeled the PKK a terrorist organization, banning its activities and shutting its offices in the country two years ago.

But the PKK continues to operate in the Qandil Mountains in northern Iraq bordering Turkey and Iran. The separatist faction has been fighting for self-rule in southeastern Turkey.

In an interview held last month in the group's mountain hideout, the PKK's military commander, Bahoz Erdal, told CNN's Arwa Damon and Yousif Bassil that the PKK is defending Kurdish rights and attacks only military targets.

"We are ready for a political solution," Erdal said, adding that the PKK would lay down its arms if Kurds were guaranteed equal rights within Turkey.

But the Turkish government told CNN in response that it does not negotiate with "terrorists."

In February, Turkish military ground forces launched a weeklong offensive against the rebels in northern Iraq.