QANDIL MOUNTAINS, Iraq (CNN) -- The women line the mountainside, locked hand in hand in their green battle fatigues, and begin dancing. It's a victory dance, they say, that is routine after raids across the border on Turkish troops. 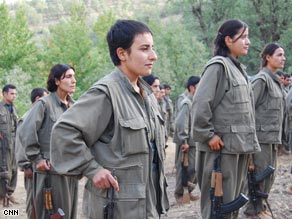 The PKK women say they are fighting for their rights. "We want ... society that revolves around women," one says.

"We want a natural life, a society that revolves around women -- one where women and men are equal, a society without pressure, without inequality, where all differences between people are eliminated," says Rengin, the head of a female battalion of the Kurdistan Workers' Party, or PKK.

Most of these fighters go by a single name.

Rengin joined the PKK in this mountain enclave in 1990, when she was just 14, after she says Turkish forces killed her father. She says she wanted to fight for Kurdish rights and women's rights.

"Women grow up enslaved by society. The minute you are born as a girl, society inhibits you," she says. "We've gone to war with that. If I am a woman, I need to be known by the strength of my womanhood, to get respect. Those are my rights. And it was hard for the men to accept this."

See photos of women with guns in mountain enclave »

Much of the outside world views the PKK with suspicion. It's been labeled a terrorist organization by the United States, Iraq, Turkey and NATO. The PKK has fought Turkey for decades to establish a Kurdish state. Tens of thousands have been killed in the conflict.

The most recent spate of fighting broke out over the weekend. The Turkish military bombed PKK positions on Saturday in response to clashes on Friday that killed at least 15 Turkish troops and 23 PKK fighters, according to the Turkish military. The PKK gives a different assessment: It says more than 60 Turkish troops were killed, and that it lost nine fighters.

Facing mounting pressure and wanting to distance itself from the PKK, the Kurdish Regional Government in northern Iraq has made it increasingly difficult for outsiders to reach the Qandil Mountains where the guerrilla group is based. Checkpoints have been set up along all routes leading to and from the mountains, intended to stop people as well as any aid and supplies from reaching the fighting force.

CNN has gotten rare access, and is taken deep into the PKK hideout. Three fighters escort us on a five-and-a-half-hour hike through rugged terrain. They move naturally through the jagged, rocky region, effortlessly climbing and descending steep trails even at night.

"We have built-in night vision," one fighter jokingly whispers.

The mountainside camps, made of makeshift tents that are easily dismantled, blend into the landscape. The fighters change locations every few days to avoid detection. As dawn breaks, a group of fighters huddles around an old radio that brings in news of the outside world. Small fires burn in front of the tents, heating water in blackened kettles for tea.

The PKK has an idealistic philosophy, one that combines Kurdish nationalism with certain communist goals, such as equality and communal ownership of property. The fighters here say that their cause has evolved beyond a desire for a Kurdish state -- that they are now fighting to generate dramatic social change.

Today, the PKK's ideology revolves around a belief that global crises and injustice are a result of millennia of male-dominated rule. Here, the women run their own assaults and have their own command structure. All tasks are shared, both on and off the battlefield. Discipline is paramount to survival, they say, and weapons are always clean and never out of reach.

Back in 1998, the fighters say, their now-jailed leader Abdullah Ocalan declared the group "a women's party." It was initially difficult to accept, says Karim, a 42-year-old male member of the PKK.

"There was an intense discussion about the role of women," says Karim.

"We didn't want to accept it at first. Women by nature are physically weaker, and in war that hits you like a boomerang. You need to watch the way you fight, the way you move. So we were against this. We didn't want the women with us because it makes combat tougher on us. But Ocalan said in his book, if we are really trying to create a new society, we have to develop women. If women are enslaved, then so are men."

Turkey accuses Iraq's Kurds of aiding the PKK, whose stronghold is located in Iraq's Kurdish northern region, an autonomous area run by the Kurdistan Regional Government.

Turkish Gen. Hasan Igsiz was quoted in the leading Turkish daily newspaper, Huriyet, as saying, "We have no support at all from the northern Iraqi administration [against the separatists]. Let aside any support, they are providing [the separatists with] infrastructural capabilities such as hospitals and roads."

Bahoz Erdal, the military leader of PKK, told CNN, "We are ready for a political solution."

"We do not expect to find a final solution immediately, but we want to take the first steps towards that solution," he said. "And that first step could be Turkey changing its attitude towards our jailed leader, stopping military sweeps and attacks against our forces, and ending its policy of oppression."

He said these can be initial steps to a solution that gives Kurds equal rights with Turkish citizens within Turkey, not a separate Kurdish state.

For its part, Turkey has said that it will not negotiate with terrorists.

She says she joined the PKK when she was 17 because she felt society was suffocating her, as a woman and as a Kurd.

Leaning forward, she pulls her vest around the two grenades that each fighter carries. "I felt different from the first moment that I got here," she says. "In the city, the atmosphere is crowded, full of people and cars. Here, there is that silence and beauty of nature. It's so different."

The fighters may seem cut off from the outside world, but they have a regular supply of arms and food brought in on mule convoys. They say they stay well funded by Kurdish expatriates all over the world.

Western defense analysts estimate their numbers based in Iraq's mountains are in the few thousands. The PKK won't tell us how large their fighting force is. But they say that it was because they are driven by passion that they have survived this long.

Rengin says on her second night in the mountains, when she was 14 years old, her unit came under attack. Her battalion commander was shot in the head. "Her head was on my knee," says Rengin, now 32. "As she was dying, she said to me: 'Our people are going to get what is rightfully theirs. I am proud to have died for this. Tell everyone we will succeed."

The armed struggle has brought few results. The PKK says it wants to shift to dialogue, but after renewed fighting, there seems to be little hope of that.