(CNN) -- The U.S. Embassy in Beirut is asking for assistance in locating two missing American journalists who were on vacation in Lebanon and have not been heard from since they left the Lebanese capital last week. 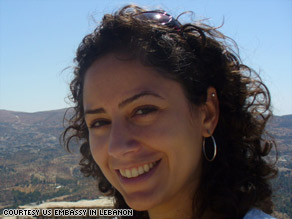 Holli Chmela, 27, was last heard from when she and a fellow journalist left Beirut, Lebanon, on October 1.

Holli Chmela, 27, and her male companion, Taylor Luck, 23, arrived in Lebanon on September 29 from Amman, Jordan, the embassy said.

They left Beirut on October 1, telling friends they were headed for the northern Lebanese cities of Byblos and Tripoli that day.

No one has reported any contact with them since then, the embassy said.

"They were then to cross by land to Syria before returning to Jordan," the embassy said. "Chmela and Luck were due to report to work in Jordan on October 4."

Luck is an editor with The Jordan Times in Amman, and Chmela had been working as a freelancer for the newspaper, said Sameer Barhoum, the paper's editor.

After flying into Beirut last week, the two planned to travel by land to the northern Syrian city of Aleppo before returning to Jordan -- also by land -- by Saturday, Barhoum said.

Luck's mother called Barhoum on Sunday after not hearing from her son in three days, he said. She also said the last time Luck used his credit card was October 1 in Lebanon.

"We are hoping that both are safe and looking forward to see them with us soon," Barhoum said.

Abdul Wahab Zugaylat, the head of Jordan's press association, said, "We are waiting to hear officially from the U.S. Embassy that they did not depart the Lebanese borders."

The U.S. Embassy said it is working with the Lebanese Internal Security Force to investigate the whereabouts of the pair.

"In addition, the U.S. Embassy in Beirut is coordinating efforts with the U.S. embassies in Amman and Damascus [Syria] as well as with the Department of State in Washington," the embassy said.

In Washington, State Department spokesman Sean McCormack said he had no details about the missing Americans.

CNN's Caroline Faraj in Dubai contributed to this report.

All About Lebanon • U.S. Department of State • Beirut • Amman (Jordan)