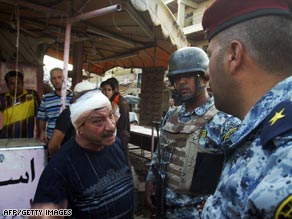 An injured man talks to a policeman Sunday after a car bomb exploded in Baghdad's Bayaa neighborhood.

The attack happened in the Shiite neighborhood of Bayaa, in southwestern Baghdad, around 1:30 p.m., the official said.

It was one of several deadly incidents to strike the Iraqi capital Sunday.

In the eastern Baghdad neighborhood of Zaiyouna, a roadside bomb injured seven people, including five police officers, the official said.

And in southern Baghdad's Dora neighborhood, unknown armed men killed two members of the Sons of Iraq -- a group of former Sunni insurgents who have turned against al Qaeda in Iraq.

Sunday's attacks came as top Iraqi officials met to discuss a recent spate of violence against Christians in the northern city of Mosul.

The Christians were reportedly frightened by a series of killings and threats by Muslim extremists ordering them to convert to Islam or face death, Iraqi officials said.

Talabani also met with U.S. Ambassador to Iraq Ryan Crocker on Sunday to discuss security, and Vice President Tariq al-Hashemi held a press conference with a group of local priests and bishops.

All About Iraq War • Baghdad