BAGHDAD, Iraq (CNN) -- Nearly 600 more Christian families have fled the northern Iraqi city of Mosul over the past week, amid threats by Muslim extremists to convert to Islam or risk death, an official in Nineveh province said Monday. 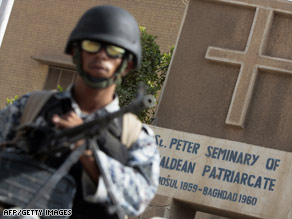 An Iraqi policeman patrols outside a church in the Baghdad district of Dora last Tuesday.

Fourteen Christians have been slain in recent weeks in Mosul, which is about 260 miles north of Baghdad. On Friday, Iraqi security forces arrested four men in Mosul in connection with anti-Christian attacks.

Iraqi security forces continue to patrol the city daily -- particularly the city's Christian neighborhoods -- and violence has decreased as a result, Goran said. Despite this, more families have fled and very few families have returned, he said.

Authorities said the attacks may have been prompted by Christian demonstrations ahead of provincial elections earlier this month.

Iraqi leaders have expressed concern about the anti-Christian attacks.

The officials reviewed the latest developments in the city and called on Christian families to return to their homes.

During the meeting, al-Isawi announced that the Iraqi government has an intelligence report showing al Qaeda in Iraq is behind the killings and displacement of Christians, according to Goran.

• An employee of Iraq's spy service was wounded Monday morning when a bomb attached to his car by insurgents detonated in eastern Baghdad, killing two bystanders, an Interior Ministry official said.

The Monday morning blast occurred in Maysaloun Square in eastern Baghdad, and killed a husband and wife inside an adjacent taxi, the official said

All About Mosul • Christianity • Iraq