(CNN) -- The U.S. military said it is investigating claims from Syria that U.S. helicopters based in Iraq killed eight people and wounded another Sunday in an attack inside Syria's territory Sunday. 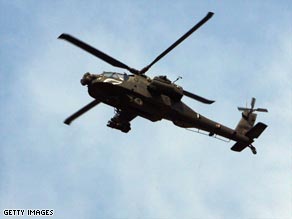 The raid occurred about 4:45 p.m. (1345 GMT). The helicopters hit a civilian building under construction on the farm, killing a father and his four sons, a married couple and another man, SANA said.

"Unfortunately, we cannot confirm anything at the moment," she said.

The attack occurred near the town of Al-Bukamal, which is home to a Red Crescent camp for Iraqi refugees.

The town is across the border from the Iraqi city of Qaim, which has been a major route for Sunni Arab fighters battling U.S. troops in Iraq.

Syria has said it has made efforts to secure the 600-km desert border, which is marked largely by a sand wall. But Maj. Gen. John Kelly, the U.S. commander in western Iraq's sprawling Anbar province, told reporters last week that much of the border remains "uncontrolled."

"We still have a certain level of foreign fighter movement, not much, through Anbar, because of our activities out there," Kelly said. But he said Iraqi intelligence believes al Qaeda operatives and others "live pretty openly on the Syrian side, and periodically we know that they try to come across."

Syria demanded Iraq's government "immediately investigate this serious violation" and bar U.S. forces from striking Syria from its territory. The Syrian government summoned U.S. and Iraqi diplomats to the Foreign Ministry in Damascus to condemn the attack, SANA reported.