JERUSALEM (CNN) -- An Israeli archaeologist has discovered what he says is the earliest-known Hebrew text, found on a shard of pottery that dates to the time of King David from the Old Testament, about 3,000 years ago. 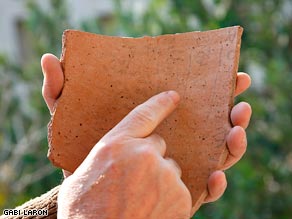 The shard -- or ostracon -- contains five lines of text divided by black lines.

Professor Yosef Garfinkel of the Hebrew University of Jerusalem says the inscribed pottery shard -- known as an ostracon -- was found during excavations of a fortress from the 10th century BC.

Carbon dating of the ostracon, along with pottery analysis, dates the inscription to time of King David, about a millennium earlier than the famous Dead Sea Scrolls, the university said.

The shard contains five lines of text divided by black lines and measures 15 by 15 centimeters, or about 6 inches square.

Archaeologists have yet to decipher the text, but initial interpretation indicates it formed part of a letter and contains the roots of the words "judge," "slave," and "king," according to the university. That may indicate it was a legal text, which archaeologists say would provide insights into Hebrew law, society, and beliefs.

The researchers say the text was clearly written by a trained scribe.

The shard was discovered at the Elah Fortress in Khirbet Qeiyafa, about 20 miles southwest of Jerusalem. The fortress, measuring 2.3 hectares (about 5.7 acres), is the earliest-known fortified city of the biblical period in Israel.

Excavations began there in June. So far, just four percent of the site has been excavated, the university said.

Because the ostracon is similar to that found in other Israelite settlements, and because no pig bones were found at the site, archaeologists say the site was likely part of the Kingdom of Judea. Jewish dietary laws forbid the eating of pork.

Among the artifacts found at the site are more than 100 jar handles bearing distinct impressions which may indicate a link to royal vessels, the university said. Such a large quantity found in such a small area is "unprecedented," the university said.

The site of Khirbet Qeiyafa is located near the place where the Bible describes the battle between David and Goliath -- the Elah Valley, which shares its name with the fortress.

Garfinkel said it is the only site in Israel in which to investigate King David.

"The chronology and geography of Khirbet Qeiyafa create a unique meeting point between the mythology, history, historiography and archaeology of King David," he said.

The Dead Sea Scrolls are the earliest-known copies of the Bible, some dating back about 2,000 years.

It is widely believed that the first set of Dead Sea Scrolls was discovered in 1947 by a Bedouin shepherd who ventured into a cave in the Judean Desert in search of a lost sheep or goat.

The texts, written on crumbling parchment and papyrus, were found wrapped in linen inside earthenware jars.

All About Hebrew University of Jerusalem • Dead Sea