(CNN) -- The choice of Barack Obama for U.S. president matches the predictions and the aspirations of the majority in the Middle East. 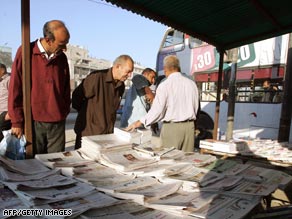 Commentators and ordinary citizens agree that by choosing an African-American for president, America will be preaching the same brands of democracy and freedom it lives at home.

Now that the first test is over, on to the burning issues and the inheritance that Barack Obama receives from his predecessor. In one analyst's words: "Obama has bought what Bush broke."

The inherited challenges are many and they are serious. Some even think they are insurmountable. They can be broken down into what Middle Eastern media call "the hot files."

Iran's unwavering nuclear ambitions are considered the toughest challenge for an Obama presidency. Iran today is a far more powerful country from that of 2000 when George W. Bush took office. Iran proudly flexes its nuclear muscle -- for peaceful purposes as it says -- and shows off alliances extending from Lebanon (Hezbollah) to the Palestinian territories (Hamas) to Syria and Iraq. Iran is seen as key to many of the U.S.'s woes in the region and without a resolution of sorts to the deadlock in the relationship between the two countries, more regional tensions are feared to be on the horizon. An entire region now watches if Obama will act on his campaign rhetoric of engaging Iran, starting dialogue and trying sanctions first before resorting to a military response.

Barack Obama's plan to pull U.S. troops out of Iraq is a welcome proposition for the region. Prior to the Iraq war in 2003, very few Middle Easterners believed that Iraq had any weapons of mass destruction. As a result, the majority of people opposed the war and thought that there were better ways to remove Saddam Hussein from power than invasion. Now, the focus is on how president-elect Barack Obama will deal with the complicated situation. Particularly worrisome, is the inability so far for the U.S. and Iraq to reach a security agreement for the future. With an Iraq still weighed down by sectarian divisions and insurgency attacks, can the Obama administration propose a security agreement that all Iraqi sides -- Kurds, Shiites and Sunnis -- will approve of?

Syria: Diplomacy or pressure in the new era?

Only a few weeks ago, a U.S. raid against a target on the Syrian side of the Iraqi border, raised already heightened tensions between Syria and the United States. The U.S. said the target was a Syrian smuggling ring of Arab terrorists into Iraq. Syria's foreign minister lashed out at the attack and called it "U.S. aggression against innocent civilians," and demanded an apology. Following the assassination of Lebanese Prime Minister Rafik Hariri in 2005, U.S. rhetoric against Syria was raised to an all time high, with President Bush calling on Syria repeatedly to "stop meddling in Lebanon's business." During his campaign, Obama expressed his position on Syria's actions saying they posed a threat to Israel as well as Iraq. The Syrian state-controlled Tishreen newspaper recently published an editorial under the headline: "Everyone knows that the period of U.S. foolishness is over." In it, the newspaper said: "It is better for them to recognize their mistakes publicly and apologize."

The rise of fundamentalism

These might be "the sizzling files" which Middle Eastern media believe should be addressed first. But, there are many more files needing immediate attention of course. Terrorism is on the mind of many in the face of a sharp rise in fundamentalism across the Middle East and North Africa. Extreme ideologies are spreading across the land with more terror groups pledging allegiance to al Qaeda and carrying out attacks in its name. Not to mention that Osama bin Laden and his deputy Ayman al-Zawahiri remain at large with no clear plan from Obama on how he plans to deal with their threat or what method he'll follow to bring them and other terrorists to justice.

The ever-present Arab-Israeli conflict, the fate of the peace process, and the status of Jerusalem are subjects that always generate heated debate. This election is no different. During his campaign, Obama made his support for Israel clear. He articulated in no uncertain terms his rejection of any possibility of "having another Holocaust." He had some conflicting opinions on the status of Jerusalem but at the end he left it to the Israelis and Palestinians to debate as a final agreement issue.

Oil and the economy

The failing world economy and U.S. petroleum policies under Obama are also topics of concern and intense debate in the Middle East. There are already conversations going on about how the Middle East region will be affected and the necessity to come up with new oil strategies and policies in the face of deadlines the president-elect has already set during his campaign for the U.S. to switch to green energy and end its dependence on Middle Eastern oil.

An already full plate for president-elect Barack Obama -- and that is just one region of the world.