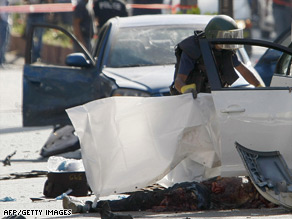 Police at the scene of the car bomb blast which killed crime boss Yaakov Alpheron.

Police say Yaakov Alperon was killed instantly when an explosive device was apparently detonated by remote control on a busy street in Tel Aviv.

The blast injured two other people, including a 13 year-old boy.

Head of one of Israel's most notorious crime families, Alperon is the most senior figure to be killed and the latest casualty of ongoing mob wars that have left scores of innocent people dead. In the past these mob-style hits have led to more revenge attacks.