(CNN) -- The U.S.-led coalition in Iraq is swiftly dwindling as security and stability return to the country, and by January only the United States and five other nations are likely to remain, according to a top military officer. 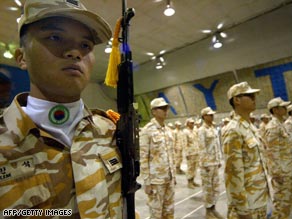 "The security situation has stabilized quite a bit and it allows the coalition as such to change," said Brig. Gen. Nicolas Matern, a deputy commander for Multi-National Corps-Iraq and a Canadian officer assigned to the U.S. Army XVIII Airborne Corps.

The United States, with 146,000 troops, and Britain, with 4,000, are the two major members of the coalition and have been the countries primarily engaged in combat.

They were among the 35 nations that contributed troops to Iraq during the war, mostly to the Multi-National Force-Iraq and some to the separate NATO and U.N. missions, Matern told CNN on Tuesday during a phone interview from Baghdad.

The number of non-U.S. foreign troops peaked at more than 25,000 during the nearly six-year conflict, but now there are little more than 6,000.

Over the next couple of weeks, Azerbaijan, Tonga, the Czech Republic, Japan, Ukraine, Bulgaria, Lithuania, Denmark, Moldova and Albania will be leaving, a total of more than 600 troops.

"Some units returning home will not be replaced by U.S. forces but will be replaced by increasingly competent and capable Iraqi security forces. That is the price of sovereignty," Matern said.

Along with the United States and Britain, Estonia, Romania, Australia and El Salvador are expected to be the remaining members of the coalition in 2009. At present, there are 750 troops from those four countries in Iraq.

"Additionally coalition forces will realign battle space as necessary based on the composition of the coalition, the readiness of the Iraqi security forces and the threat situation," Matern said.

Aside from the United States and Britain, coalition troops mainly have been involved in support operations, such as force protection, guarding detention camps, training soldiers, intelligence gathering, ordnance disposal and engineering and medical work. Some have been involved in combat.

Some of the coalition nations, such as Poland, South Korea and Georgia deployed several thousands of troops while others, such as Kazakhstan and Armenia, deployed a few dozen.

Many of these nations lost troops during the war.

The United States and Britain have lost 4,207 and 176 troops, respectively.

"We are extremely thankful for the contributions of all these individual countries," Matern said. "They filled a spot. They brought something to the equation."

He said he recalled a comment from an El Salvadoran officer who was asked what the smaller nations brought to the table in Iraq. He said they make a difference at the personal level with the people they help.

"I really feel they leave with a genuine sense of accomplishment," he said.

The drawdown of coalition troops in Iraq will continue.

The United States has negotiated a bilateral security agreement in Iraq that requires the departure of all U.S. troops by the end of 2011. Also, President-elect Barack Obama on Monday reiterated his stance that removing combat troops from Iraq in 16 months is the right timeframe. He also backs maintaining "a residual force" for training and logistical support.

That security agreement, approved last week by Iraq's parliament, must be ratified by the country's three-member presidency council. Matern said the other nations whose troops remain in Iraq with the coalition will be negotiating similar agreements with the government.

The attacks came a day after a suicide bomber killed at least 16 Iraqis and wounded nearly three dozen people in Mosul, including two U.S. soldiers.

In one attack Tuesday, a parked car bomb targeting a police patrol killed at least five people -- including one police officer -- and wounded 25 others. Four of the wounded were also police officers, the Interior Ministry official said.

The second attack came when a cart filled with explosives detonated near an elementary school, killing at least six people and wounding 15 others, the official said. Nearby shop owners and customers were killed. Most of the wounded were schoolchildren.

The city and the region -- Nineveh province -- has an al Qaeda in Iraq presence, and the U.S. and Iraqi troops have been battling militants there for months.