Carter meets with political leader of Hamas in Syria 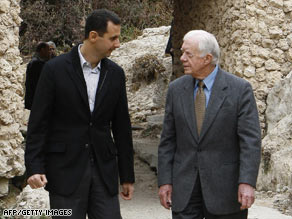 In that meeting, the Hamas leader promised Carter that the group would allow Shalit to send a message to his parents, Noam and Aviva.

Carter also asked Hamas to release Shalit, Meshaal said after the former president's visit, but the request was rejected.

Hamas said Sunday it will soon release a statement about the latest meeting between Carter and Meshaal.

Carter's series of meetings with top Hamas officials in April garnered condemnation from the U.S. and Israeli governments.

They criticized him for engaging in diplomacy with a group that both governments consider a terrorist organization.

How the incoming Obama administration will receive Carter's meetings with Hamas remains to be seen.

During his visit in Syria, Carter also visited the Saint Taqla convent in the city of Maalula, north of Damascus, with Syrian President Bashar al-Assad.

CNN's Cal Perry contributed to this report in Beirut, Lebanon.