(CNN) -- Iraq proved to be the deadliest beat in the world for reporters for the sixth year in a row, the Committee to Protect Journalists said Thursday. 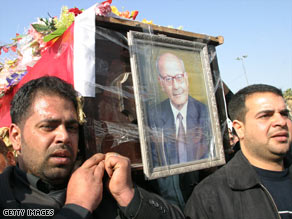 Iraqis carry the coffin of reporter Shihab al-Timimi, who died of gunshot injuries in February.

The organization's annual year-end analysis tallied 11 journalist deaths this year in Iraq, down from 32 in both 2007 and 2006. Another 22 deaths in Iraq were being investigated to see whether they were work-related.

Those who died in Iraq were local journalists working for domestic news organizations. Among the victims were Shihab al-Tamimi, head of the Iraqi Journalists Syndicate, who died from injuries sustained in a shooting in Baghdad. Soran Mama Hama, a reporter for Livin magazine, was gunned down in front of his home after reporting on prostitution and corruption in Kirkuk.

Since the Iraq war began in March 2003, 136 journalists and 51 media workers have been killed, the organization said.

CPJ said the decline of deaths in Iraq was largely responsible for bringing down the worldwide death toll. This year, 41 journalists died in the line of duty worldwide, compared with 65 in 2007.

Journalists told the CPJ that they attributed the decline in Iraq to a variety of factors, including an increase in U.S. troop levels, the turning of Sunni tribal leaders against al Qaeda and a declining Western media presence in Iraq, according to the organization.

The organization said the numbers also reflected a shift in global hot spots to Asia and the Caucasus.

Three reporters were killed in Thailand, and another three died in five days of fighting among Georgian, Russian and local forces over the disputed region of South Ossetia.

Seven journalists died covering combat. Reuters cameraman Fadel Shana was killed by an Israeli tank shell in Gaza though he was wearing a jacket marked "Press."

Mexico is the most dangerous place for reporters in the Americas, the CPJ report said.

On a street in Villahermosa, the capital of the Gulf Coast state of Tabasco, Mexico, radio host Alejandro Zenon Fonseca Estrada was shot dead. Four other Mexican journalists were killed under unclear circumstances during the year, the report said.

Another seven Mexican journalists have been reported missing since 2005.