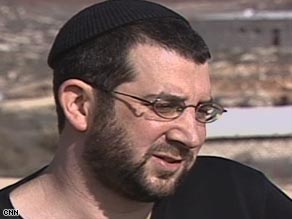 Laing is using his skills to fix what he says is a profound image problem for Jewish West Bank settlers.

He's started an Internet TV series called "Hill 769" to counter what he believes is a media bias in Israel proper against the illegal Jewish settlements in the Palestinian territory labeled outposts.

Noting what he believes is the penchant of Israeli TV for broadcasting negative footage of settlers, such as images of those resorting to violence, Laing has produced three 10-minute episodes, all with shoestring financing and resources.

"I think the media is very hostile to the Jews living here, and they depict them very negatively," Laing said, referring to the West Bank.

In one episode, a religious Jewish settler at an illegal outpost is the strong and humane hero. A Palestinian militant is a violent villain, and a secular Israeli journalist is portrayed as weak and selfish.

Watch clips from the episode »

The Palestinian fires at the journalist, who calls the settler to ask for help.

All West Bank settlements are controversial across the Jewish state, where they are seen as impediments to Israeli-Palestinian peace by some and integral aspects of the Jewish homeland by others.

While many settlements are long-established and legal under Israeli law, the remote outposts in the hilly, scraggy land are illegal. Some have been forcibly dismantled by Israeli soldiers, and others are expected to be taken down as part of a future peace deal with the Palestinians.

At present, the series is only available on Israel's Settler Radio Internet page.

While he is preaching to the converted on a small scale, Laing said he hopes his program can become a weekly TV series.

"I think there's a whole other story here that's not being told," he said.