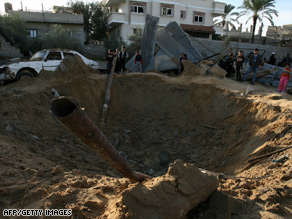 Palestinian children look at a blast crater following an Israeli airstrike over southern Gaza on December 18.

No one was hurt in the attacks and one car was damaged, it added.

Under the Egytian-brokered truce, which began June 19, the Hamas government in Gaza agreed to end militant attacks from Gaza on Israel. The pledge applied to all militant groups in the coastal territory, including Islamic Jihad.

In return, Israel agreed to halt raids inside Gaza and ease its blockade.

The truce held well for the first four months but began to fall apart in October, when there was a marked increase in the number of rockets fired from Gaza into Israel -- estimated at 200. Israel resumed airstrikes in Gaza as a result.

Watch what may follow the end of the truce »

Israel has said a major military operation in Gaza may be unavoidable if daily rocket fire from the territory continues.

However, both sides have expressed a desire not to see the situation worsen.

Islamic Jihad said it planned a rally in Gaza City in the afternoon, after Friday prayers, announcing the end of the truce but also calling for a lifting of the Israeli siege.

Israel has tightened its restrictions on border crossings and the flow of goods into the impoverished territory, making life extremely difficult for residents.

Gaza depends on Israel for 90 percent of its imports, according to the U.N. Development Program.

-- CNN's Ben Wedeman and Michal Zippori contributed to this report.

All About Israel • Palestinian Islamic Jihad