From Shirzad Bozorgmehr for CNN 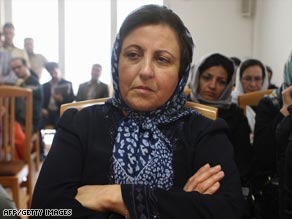 Shirin Ebadi won the Nobel Peace Prize in 2003 for her human rights work.

The Iranian authorities never gave her an explanation for the crackdown, and she was later released, she said, adding that there were no arrests in the raid, but the offices remain closed.

Speaking from her home, Ebadi said the closed offices belong to two non-governmental organizations funded by her Nobel Peace Prize earnings: the Center for Participation in Clearing Mine Areas, which helps victims of landmines in Iran; and Defenders of Human Rights Center, founded five years ago to report human rights violations in Iran, defend political prisoners, and support families of those prisoners.

Ebadi said Iranian authorities had no written justification for Sunday's raid, which she described as illegal.

"The collective activities of the human rights activists in Iran have angered the Iranian authorities so much that they have illegally ordered the closing down of two NGOs," she said.

Ebadi won the Nobel Peace Prize in 2003 for her human rights work, making her the first Iranian to receive the honor. She is one of the most prominent Muslim women in the world and serves as the president of the Defenders of Human Rights Center.

In August 2006, Ebadi said the Iranian government informed her that the agency is "illegal" and vowed to arrest those who continued to work there.

"Of course, me and the other members of the center do not intend to shut down the center and we shall continue our activities," she said at the time.

She said the center -- which has operated for over five years in Tehran -- "is a member of the International Federation for Human Rights" and "has also been awarded a human rights prize by the Human Rights National Commission in France."

"This center is very well known and credible in Iran," she said in 2006.

The Nobel committee has described Ebadi as a champion of human rights who "sees no conflict between Islam and fundamental human rights.

"As a lawyer, judge, lecturer, writer and activist, she has spoken out clearly and strongly in her country, Iran, and far beyond its borders. She has stood up as a sound professional, a courageous person, and has never heeded the threats to her own safety."