JERUSALEM (CNN) -- Some Israeli archaeologists are having a particularly happy Hanukkah, thanks in part to a British volunteer who took time off from her job to work on a dig. 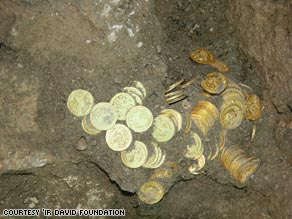 Archaeologists found a hoard of gold coins from the 7th century in Jerusalem on Sunday.

The coins were minted during the early 7th century.

Researchers discovered the coins at the beginning of the eight-day Jewish holiday of Hanukkah, which started at sunset on Sunday.

One of the customs of the holiday is to give "gelt," or coins, to children, and the archaeologists are referring to the find as "Hanukkah money."

Nadine Ross, a British archaeological volunteer, happened onto the coins during the dig just below the walls of the Old City of Jerusalem.

"To be honest, I just thought, 'Thank God I didn't throw it in the rubbish bucket,' " said Ross, who had taken four weeks off from her engineering job in England to work at the site. "I was just glad I sort of spotted it before I disturbed it too much."

The 1,400-year-old coins were found in the Giv'ati car park in the City of David in the walls around Jerusalem National Park, a site that has yielded other finds, including a well-preserved gold earring with pearls and precious stones.

They were in a collapsed building that dates back to the 7th century, the end of the Byzantine period. The coins bear a likeness of Heraclius, who was the Byzantine emperor from 610 to 641.

The authority said that while different coins had been minted during this emperor's reign, the coins found at the site represent "one well-known type."

In that style, the emperor is clad with military garb and is holding a cross in his right hand. On the other side is the sign of the cross.

Authorities said the excavation of the building where the hoard was discovered is in its early stages. They are attempting to learn about the building and its owner and the circumstances of its destruction.

"Since no pottery vessel was discovered adjacent to the hoard, we can assume that it was concealed inside a hidden niche in one of the walls of the building. It seems that with its collapse, the coins piled up there among the building debris," Ben-Ami and Tchekhanovets said.

The find is a a golden moment for Ross, who said "it is a pity that I can't take it home with me. But there you go."

All About Jerusalem • Archaeology