Ahmadinejad: Jesus would stand with oppressed

LONDON, England (CNN) -- Iranian President Mahmoud Ahmadinejad's upcoming Christmas message will say Jesus would be a defender of the oppressed if he were alive today. 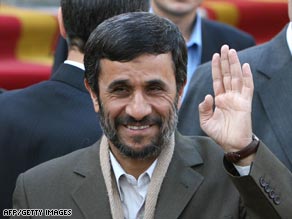 "Jesus the Son of Mary is the standard-bearer of justice, of love for our fellow human beings, of the fight against tyranny, discrimination and injustice," Ahmadinejad will say, according to a preliminary text of remarks he is planning to deliver in a message to be broadcast Thursday -- Christmas Day -- on British TV.

The fiery Iranian leader, who has angered Western countries with his sharp comments on Israel, nuclear power, and the role of the United States in the world, will be delivering the Alternative Christmas Message on Britain's Channel 4.

The network, which calls the event a "traditional alternative to The Queen's Christmas Day broadcast," issued the preliminary text.

The thrust of his words and the overall message contained religiously inclusive rhetoric, such as his congratulating "the followers of Abrahamic faiths, especially the followers of Jesus Christ, and the people of Britain." And his words conjured a hopeful future.

But some of his remarks reflected Ahmadinejad's trademark bluntness.

"If Christ was on earth today undoubtedly he would stand with the people in opposition to bullying, ill-tempered and expansionist powers," the text says.

"If Christ was on earth today undoubtedly he would hoist the banner of justice and love for humanity to oppose warmongers, occupiers, terrorists and bullies the world over.

"If Christ was on earth today undoubtedly he would fight against the tyrannical policies of prevailing global economic and political systems, as he did in his lifetime."

The alternative address tradition, which began in 1993, has included remarks from the Rev. Jesse Jackson, an injured Afghan war veteran, a survivor of the attacks of September 11, 2001, and Marge from the television show "The Simpsons."

The network notes that "relations between Iran and the West" will play "a central role in world affairs" in the coming year. The address -- which won't be broadcast opposite the queen's message -- will be preceded by a "short introduction" that will put the leader's "appearance in context."

"As the leader of one of the most powerful states in the Middle East, President Ahmadinejad's views are enormously influential. As we approach a critical time in international relations, we are offering our viewers an insight into an alternative world view," said Dorothy Byrne, head of news and current affairs.

"Channel 4 has devoted more airtime to examining Iran than any other broadcaster and this message continues a long tradition of offering a different perspective on the world around us."