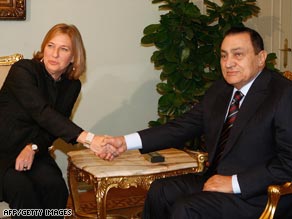 The session follows the end of a tenuous 6-month-long cease-fire between the Israeli military and Hamas militants in Gaza.

Egypt mediated the first truce and is trying to negotiate an extension despite what Israel says are dozens of rockets fired by Hamas into the Jewish state this week.

Livni criticized Hamas after her meeting with Mubarak.

"Hamas needs to understand that Israel's basic desire to live in a tranquil region doesn't mean that Israel is willing to accept ongoing shooting at its population," she said, according to the Israeli Foreign Ministry.

"Enough is enough. We cannot accept this situation, and the situation will change."

The Egyptian Foreign Ministry said this week that it would help countries and organizations deliver aid through Egyptian territory to Palestinians in Gaza.

Livni also met with the head of Egyptian intelligence Thursday and is scheduled to talk with the Egyptian foreign minister.

Israeli military officials said Hamas militants fired more than 65 rockets into southern Israel on Wednesday. Meanwhile, the Israeli air force said it killed a Hamas militant who was part of a group launching the rockets into Israel.

An Israeli police spokesman said no one had been injured in the latest barrage of rocket attacks.

But emergency workers with Magen David Adom, Israel's Red Cross agency, treated 57 people suffering from shock, half of them children, an agency official said, adding that 200 ambulances were standing by in the area.

"I think the circumstances are extremely tragic, that Muslim zealots of Hamas have decided to shatter and ruin the Christmas celebrations of the Christian brothers in the Holy Land, both in the West Bank and of course in Gaza itself," Israeli Welfare Minister Isaac Herzog said.

"If things deteriorate further, then of course we'll have to take necessary action, which will be very painful," Herzog said, adding that civilians had gathered in shelters in southern Israel to try to stay safe amid the rocket attacks.

Asked about the possibility of Israel coming up with a new strategy, Herzog responded, "The new strategy could be, of course, an all-out conflict against Hamas, which is a possibility that voices in Israel are calling for. We are trying to show restraint."

Hamas is a Palestinian Islamic fundamentalist organization whose military wing, Izzedine al Qassam, has admitted responsibility for terrorist attacks against Israeli civilians as well as attacks against the Israeli military. Israel and the U.S. State Department consider Hamas a terrorist organization, though it also operates an extensive social services network in the territories.

Mark Regev, spokesman for Israeli Prime Minister Ehud Olmert, said, "Our position is clear: We will answer quiet with quiet, and we will answer attacks with measures designed to protect our people."

Olmert has threatened to respond to the ongoing attacks.

The truce between the Hamas government in Gaza and Israel expired Friday. Under the Egyptian-brokered deal, Hamas agreed to end militant attacks on Israel from Gaza, and Israel agreed to halt raids inside the territory and ease its blockade on humanitarian goods.

In reality, the truce had started breaking down two months ago. Rocket attacks by militants became more frequent, and Israel resumed airstrikes inside Gaza.

"We really appreciate the Egyptian efforts. ...," Herzog said. "The Egyptians have tried endlessly and tirelessly in the past few weeks to bring Hamas back to cease-fire mode."

"A responsible government is neither eager for battle, nor does it shy away from it," he said.

All About Israel • Hamas • Gaza • Egypt