(CNN) -- Life for Gazans has not been easy and the misery has only deepened amid the escalating conflict between Israel and Hamas, the Palestinian militant group which rules Gaza. 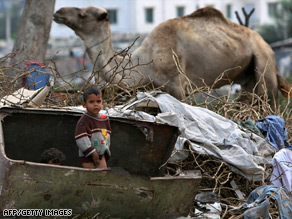 Gaza is a tiny strip of land that lies between Israel, Egypt and the Mediterranean Sea. It is one of the most densely populated places on Earth, with an estimated 1.5 million Palestinians living there. Unemployment runs at 49 percent and 80 percent live on less than $2.30 per day, according to the United Nations.

Eight British human rights groups this year issued a report saying "the situation is worse now than it has ever been since the start of the Israeli military occupation in 1967."

The report, "The Gaza Strip: A Humanitarian Implosion," heavily criticized Israel's economic blockade of Gaza, which bars many people and goods from leaving or entering the territory. The action had imposed extreme hardships throughout the 360-square kilometer (139 square-mile) territory, said the groups which include Oxfam, Christian Aid and Save the Children UK.

"As a result of the blockade and collapse of the economy, there is little money to buy food and limited food to buy. Food prices are rising and wheat flour, baby milk, and rice, among other essential goods, are increasingly scarce," the report said.

Israel rejected the report saying it was not to blame for the crisis and pointed the finger at Hamas. Read a timeline showing how Hamas evolved

Sanctions aimed at weakening Hamas have severely hampered Gaza's economy, which is largely based on agriculture.

While many of Gaza's recent economic problems have been connected to the 2000 intifada, or uprising against Israel, and the resulting crackdown by the Jewish state, the underlying poverty stretches back even further, to the roots of the Israeli-Palestinian conflict.

Gaza was part of the Ottoman Empire until World War I. It then came under British control. In 1947, the UN recommended partitioning the British mandate of Palestine into Arab and Jewish states. The Jews accepted the resolution, but the Arabs opposed it.

Jewish settlers declared the formation of the state of Israel in 1948 and surrounding Arab nations invaded. During the war, Egypt gained control of Gaza. Hundreds of thousands of Palestinian refugees fled Israeli-controlled territory and many ended up in refugee camps in Egyptian-controlled Gaza.

In 1950, the United Nations Relief and Works Agency for Palestine Refugees in the Near East (UNRWA) began administering aid and social services to these refugees.

Israel took control of Gaza during the Six-Day War in 1967, which marked the beginning of a long Israeli occupation.

Israel pulled out of Gaza in 2005, but has maintained control over much of the territory's borders along with its territorial waters and airspace.

Israel imposed an economic blockade after Hamas seized control of the territory from its secular rival, Fatah in 2007. Israel tightened those sanctions because of ongoing rocket fire at Israeli towns, it said. Meanwhile, Egypt also sealed its crossing with Gaza.

The tightened controls made it difficult for food, water, medical supplies and other essentials to reach the population. International aid has kept the Palestinian economy afloat during the years of violence. The World Bank estimates that the West Bank and Gaza received almost $1 billion a year in international economic aid to alleviate hardship.

Under an Egyptian-brokered cease-fire in June, Hamas agreed to stop rocket fire in return for Israel easing the blockade. The truce, which was always shaky, expired December 19.

There are renewed concerns about the people of Gaza, following the new outbreak of hostilities between Israel and Hamas. And there is no end in sight: Israel says its operation will continue until Hamas stops firing rockets into Israel while Hamas has vowed to defend Gaza in the face of what it calls continued Israeli aggression.