Olmert: No peace in Gaza till Hamas rockets stop 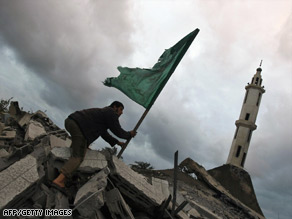 A man plants a Palestinian flag Wednesday in the rubble of a mosque in Gaza City.

"We did not enter this operation in order to end it with the firing still continuing," Olmert said in a security cabinet meeting, according to a senior government official.

"Hamas broke this cease-fire," Olmert said. "If the conditions ripen" and if there is a solution "that promises a better security ... we will consider it, but we are not there yet," he said, according to the official.

Despite a French proposal for a humanitarian truce, Israel earlier Wednesday decided to continue the operation, saying Israelis must have a "real and sustainable solution," Olmert spokesman Mark Regev said.

Israeli airstrikes have pounded the territory since Saturday in an effort to halt the firing of rockets into southern Israel.

More than 390 Palestinians have been killed, according to Palestinian medical sources, and some 1,900 people have been wounded, including 400 women and children.

"The aggression must stop, the crossings must open and the blockade must be lifted and then we can talk about all other issues," he said in televised comments Wednesday. "Then we can start a national dialogue without any preset conditions."

The Israeli air force carried out about 40 airstrikes Wednesday, and Palestinian militants fired about 70 rockets into Israel, the IDF said.

More than 30 rockets landed in southern Israel on Wednesday, including at least four in Beer Sheva, Israeli police spokesman Mickey Rosenfeld said. Beer Sheva, about 25 miles away from Gaza, is the farthest that rockets from Gaza have ever landed inside Israel.

"Israel will not accept a 'Strip of Terror' alongside us, and accordingly Hamas operatives have tasted the flavor of Israel's response in the last few days," Israeli President Shimon Peres said.

Watch what may be influencing Israeli decision-making »

The situation in Gaza remains desperate, despite the admission of more than 150 trucks carrying humanitarian aid into the territory on Tuesday, said Karen AbuZayd, the commissioner-general of the U.N. Relief and Works Agency.

"Hundreds of families in the Gaza Strip are suffering, not only [from] the fear of airstrikes, but also the lack of electricity, lack of water, lack of food supplies," Saud Abu Ramadan, a freelance journalist who lives in Gaza City, told CNN's "American Morning."

Exiled Hamas leader Khaled Mashaal is ready to stop the fighting in exchange for an end to Israel's blockade of Gaza, the Russian Foreign Ministry announced.

Mashaal spoke with Russian Foreign Minister Sergei Lavrov on Wednesday and outlined Hamas' position on the resumption of the Palestinian reconciliation process, the foreign ministry said.

"Mashaal said in response to [Lavrov] that they are ready to end the armed confrontation, but only if these measures are linked to steps intended to remove the Gaza Strip's blockade," the ministry said.

While living in self-imposed exile in Damascus, Syria, Mashaal remains the head of Hamas, which controls Gaza.

Earlier Wednesday, the Israeli military warned neighbors of Hamas co-founder Mahmoud al-Zahar to leave because it may bomb the area, the neighbors told CNN.

Al-Zahar was the Palestinian foreign minister under the Hamas-led government before it was dissolved by President Mahmoud Abbas after Hamas seized control of Gaza in 2007.

Al-Zahar's son was killed in an Israeli airstrike in January 2008.

Israel has moved tanks to the outskirts of Gaza and called up at least 2,000 army reservists, sparking fears of a ground incursion into the Palestinian territory.

Watch how Israel is sitting on Gaza's border »

The Israeli military says it is targeting only Hamas militants. But the U.N.'s AbuZayd said 20 to 25 percent of the casualties arriving in Gaza hospitals appear to be civilians, and she said the bombardment is not turning the people of the territory against Hamas.

"Hamas is not the one being blamed. It's still Israel, America," she said.