MIAMI, Florida (CNN) -- A tropical storm watch was issued Friday for Bermuda as Hurricane Bertha moved closer to the Atlantic island, causing swells and high turf on its beaches. 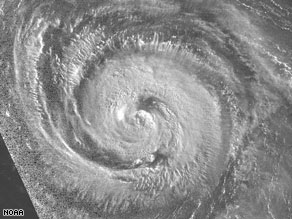 A satellite picture from 5:45 a.m. ET Friday shows Hurricane Bertha over the Atlantic.

"On this track, the center of Bertha is expected to slowly pass to the southeast and east of Bermuda during the next couple of days," the agency said in an advisory.

Bertha's maximum sustained winds are at near 90 mph (145 km/hr), with higher gusts, the hurricane center said.

The Bermuda Weather Service issued a tropical storm watch for the island around midday, meaning tropical storm conditions are possible in the area, the hurricane center said.

The center advised those on the island, a self-governing British colony, to monitor Bertha's progress closely.

Bertha's intensity has fluctuated. At its peak Monday, it was a major Category 3 hurricane with top winds of 120 mph (193 km/h).

See how hurricanes are classified »

The storm formed July 3 off Africa near the southern Cape Verde Islands. It strengthened into a hurricane Monday.

The first tropical storm of the season, Arthur, formed May 31 near the coast of Belize and dumped heavy rain on Central America and southern Mexico.

All About Hurricanes and Cyclones • National Hurricane Center