MIAMI, Florida (CNN) -- Hurricane Ike grew from a Category 1 into a menacing Category 4 storm in about six hours Wednesday as it fed on the warm waters of Atlantic, the National Hurricane Center said. 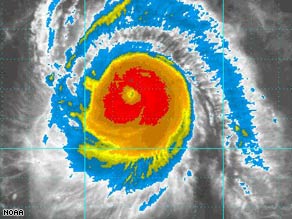 An infrared image from a NOAA satellite shows Ike swirling in the Atlantic on Wednesday night.

"Ike is an extremely dangerous Category 4 hurricane" with 135-mph sustained winds, the center said in its 11 p.m. ET advisory.

Although it is likely to lose some strength during the next few days, Ike is forecast to regain Category 4 status by Monday, the center said.

"It is too early to determine what, if any, land areas might be affected by Ike," the hurricane center said.

But the center's potential four- to five-day track for Ike puts it anywhere from north of Jamaica to the coast of South Florida on Monday. iReport.com: Are you in Ike's path?

At 11 p.m. ET Monday, Ike was moving west-northwest through the Atlantic Ocean. The storm will be over open water for two days, forecasters said.

Earlier Wednesday, Ike intensified into the fifth hurricane of the 2008 Atlantic season when its winds reached 80 mph.

But before Ike can reach into the Caribbean or threaten Florida, Tropical Storm Hanna was getting more organized in the Bahamas, according to the hurricane center.

Hanna was drenching the Bahamas and Haiti with torrential rains.

Haitian officials put the nation's death toll in the wake of Hanna and Hurricane Gustav at 61, said Abel Nabaire, the deputy coordinator of the civil protection service.

Eight of the country's 10 departments underwater, he said.

More rainfall, up to 15 inches in some places, was possible in the Caribbean, the hurricane center said.

Hanna was forecast to return to hurricane strength by Friday as it shot up the east coast of the southern U.S., with landfall predicted on the South Carolina or North Carolina coast late Friday or early Saturday.

"A hurricane watch may be required for a portion of the southeastern United States coast early Thursday and interests in this area should monitor the progress of Hanna," the hurricane center said.

Watch as Florida also keeps an eye on Hanna »

Swells from Hanna are expected to bolster the number of rip tides along the southeastern U.S. coast this week, the hurricane center said. iReport.com: Hanna makes waves in Bahamas

Hanna passed over the northern Haitian city of Gonaives on Tuesday night, leaving water more than 12 feet deep in some places, an official said.

Many people were still cut off amid floodwater.

"It's a very grim picture," Dr. Jean Pierre Guiteau of the Red Cross said Wednesday. "We can't reach those people; they are standing on rooftops, waiting for help."

In line behind Ike in the Atlantic is Tropical Storm Josephine, with top winds near 50 mph, the hurricane center said. Josephine was about 425 miles west of the southernmost Cape Verde Islands off western Africa.